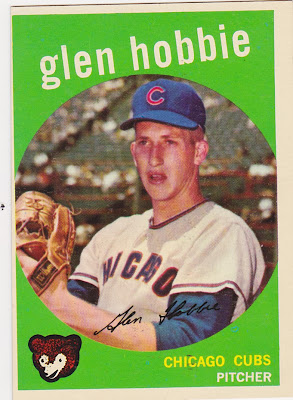 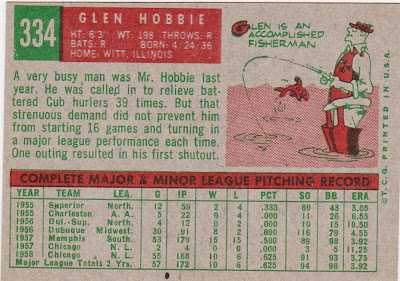 Righty Glen Hobbie signed with the Cubs in 1955 out of tiny Witt, Illinois. After three so-so years in the minors he got a quick look at the bigs late in 1957 and took a pounding in two appearances. Nonetheless he made the club in '58 and did well going 10-6 in 55 games. Those 10 wins actually led the Cub staff. Among the starters only Moe Drabowsky had as many as 9 wins. He made 16 starts that year and was moved into the rotation for 1959.

He won 16 games in '59 including a pretty spectacular one hitter on April 21 in which he was perfect until, with two outs in the seventh, Stan Musial doubled. Hobbie won the game 1-0. He came back with another 16 win season in 1960 but suffered the indignity of losing 20. The fact that the Cubs were pretty terrible had a lot to do with that. Hobbie's ERA in his 16 win seasons was 3.69 and 3.97.

Hobbie's career went off the cliff beginning in '61 and he never again had a winning record. He went 21-47 through 1964, a season that saw him dealt to the Cardinals for Lew Burdette. Interestingly Hobbie's last big league win was a big one. In June of '64 the Cardinals were in San Francisco and Hobbie started the second game of a doubleheader. It was his second start for St. Louis after the trade. He allowed a run on a couple of hits to open the game before settling down to retire 25 of 26 batters to gain the win. As is pointed out in this blog post, the Cards won the '64 pennant by a single game so that one win by Hobbie has some real significance.

The Cards traded him to the Tigers but a bad shoulder limited him to some minor league action in 1965 and he then retired at the age of 28. Hobbie's short career could be traced to his being used as both a starter and reliever for the bulk of his time in Chicago.  I did some checking and found that in 1958 Hobbie pitched in 55 games which was second highest in the NL behind Johnny Klippstein, a pure reliever. In '59 he made 33 starts and pitched in a total of 46 games, second only to Sam Jones among regular starting pitchers. And in 1960 he made 36 starts and once again pitched in 46 games, the most of any pitcher with 25 starts.

Glen Hobbie died earlier this month at the age of 77 in his home state of Illinois.