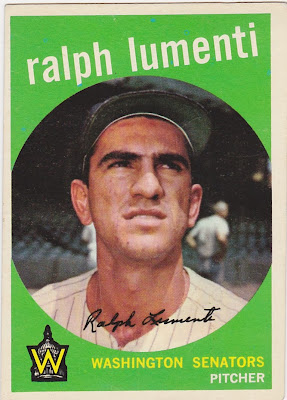 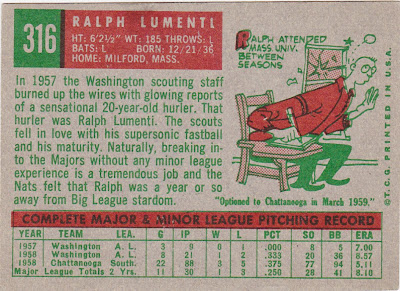 Early last year I posted the '59 Topps card #316 which is supposed to show Ralph Lumenti. As noted in that post the picture is not Lumenti but rather it's a shot of Senators teammate Camilo Pascual.

A few days ago reader Sheriff Tom pointed out that not only is Lumenti not shown on his Topps card but his Baseball Reference page features the same incorrect picture. Some guys just can't catch a break.

As I noted in my reply to Tom my copy of the Lumenti/Pascual card is is terrible shape. It's probably the worst conditioned card in my set binder (outside of the Gibson rookie).

So I figured the least I could do was upgrade the card. If Lumenti was going to have an error card at least it would be a nice error card.

I found this one on eBay just a couple of bucks shipped and it arrived in a day or so. It was listed as vg/ex and it's easily at least that good. I am also going to send BR a note about the incorrect picture. Hopefully they will fix it. We'll see. Below is a screenshot of the 'before' page. I hope to be able to come back and add the 'after'. 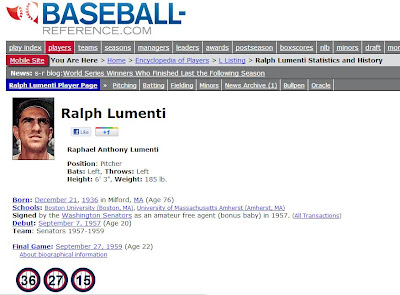 August 20 Update: I received an email from RB Feedback stating that they were going to notify their picture provider of the error.
Posted by Commishbob at 6:00 AM