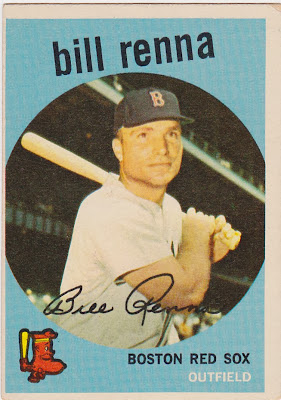 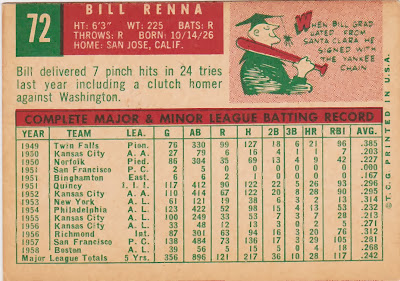 William "Big Bill" Renna was a 3-sport collegiate standout at Menlo College and Santa Clara in California when he was signed by the Yankees in 1949. He displayed plenty of power and a hit near or better than .300 in his four year stretch in the Yankee chain. In one game in 1952 playing for the Yanks' AAA club in Kansas city he was part of a 10 home run (six in one inning!), 53 total bases assault. Renna hit two of those homers in a game that set American Association records that stand today.

Renna played in New York in 1953 but, while he hit .314, he failed to show much of his expected power. He was dealt to the Athletics who held on to him until June of 1956 when the bosses in New York decided he might be useful and had the Athletics send him back. During his 2+ seasons with the A's he hit 26 homers but batted just .214. He spent the remainder of the 1956 season with the Yankee farm club and he again showed the bat he had earlier in the minors.

The Red Sox acquired him for the 1957 season and after another season in the minors he played sparingly in Boston through May of 1959. Renna worked in the concrete business after he retired. He tells much of his own story in an interview on the This Great Game site.

I found a couple of variations of this picture of Bill Renna in a couple of places. I like it a lot. 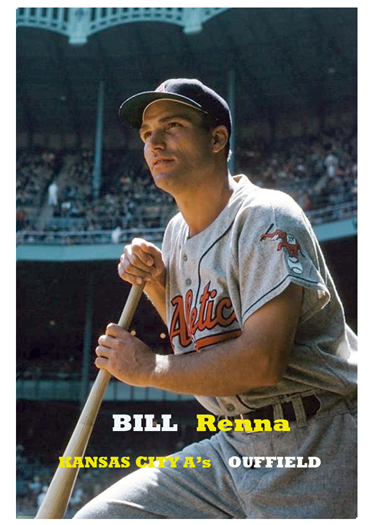