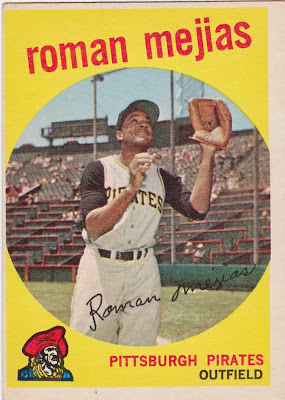 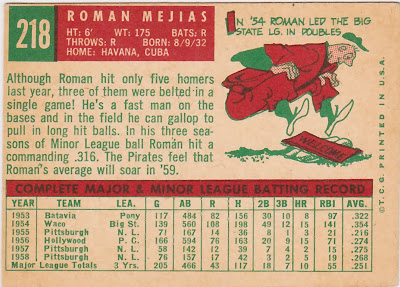 Here is a cocktail party trivia winner (all of you go to cocktail parties don't you?). Who hit the first major league home run in the state of Texas?

The answer is Roman Mejias. In the bottom of the third inning in the first game played by the expansion Houston Colt 45s Mejias knocked a Don Caldwell pitch through the humid Houston air and made city history. He hit another homer in the eighth as part of a 3 for 5, 6 RBI game. His 45s won 11-2.

Mejias was signed by the Pirates out of Cuba where he had played high school ball and worked the sugar cane fields and became a winter ball star. He hit well during his minor league days. He spent several seasons trying to crack the Pirates outfield lineup but with Bill Virdon, Bob Skinner and some guy named Roberto Clemente ahead of him he was doomed to 4th outfielder and pinch hitting duties when he wasn't being shuttled to minors.

Being taken with the 11th pick of the expansion draft by Houston led to his one year as a major league regular. He was hitting .311 and had 19 homers at the All Star break in '62 but wasn't selected for the NL team. Supposedly he was pretty disappointed by that.

Despite (or because of) his '62 hitting exploits the Colts were able to trade him to the Red Sox for Pete Runnels. He played for the Sox as a semi-regular in '63, played sparingly in '64 and then found himself back in the minors and then he played a year in Japan before he left the game.

This is another pretty sweet card. Just one corner ding mars it. Mejias is posed in Seals Stadium with a glove that looks pretty big, especially for that time. There are a couple of informative and entertaining pages devoted to Mejias on the 'net. That second one has a ton of pictures. Always nice to see the great Colt 45s jersey.