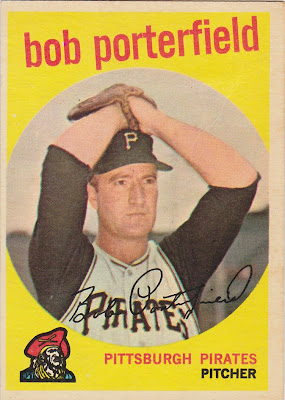 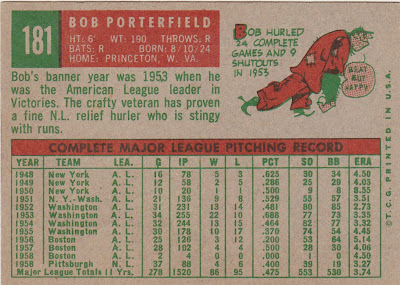 Virginia righty Bob Porterfield had one truly exceptional year in his twelve year career and it came in 1953. After kicking around the Yankee organisation for 5 years or so, making yearly visits to the majors and being sent back down, he was acquired by the Senators in June of 1951.

Unlike Casey Stengel, Nat skipper Bucky Harris (who had been Porterfield's first manager) had some faith in him. He put Porterfield in the rotation and the steady work paid off. He went 9-8 with a nice ERA the remainder of that year and came back in '52 to win 13 games.

His 1953 season saw Porterfield lead the AL with 22 wins. This on a 76-76 club that finished fifth. He led the league with 24 complete games and nine shutouts. Hell, he even hit well compiling a .255 average and hitting three of his six career dingers. He was named the Sporting News' AL Pitcher of the Year. He managed to do all this while striking out just 77 batters in 255 innings. that's the lowest amount of whiffs by any twenty games winner since the Second World War.

While he never again approached his '53 numbers Porterfield came back to win 24 games over the next two seasons with the Senators before being traded to the Red Sox. By 1958 he was in the Pirates' bullpen and picked up six saves. 1959 was his last season in the majors and he bounced back and forth between the Pirates and Cubs. He pitched two more seasons in the minors before retiring.

Porterfield worked as a welder after his baseball days and died of lymphoma at the age of only 56 in 1980.

He was lucky enough to avoid being photographed for his card wearing the Pirates batting helmet. Looks to be the Coliseum in LA in the background. Maybe Branch Rickey skipped that road trip.