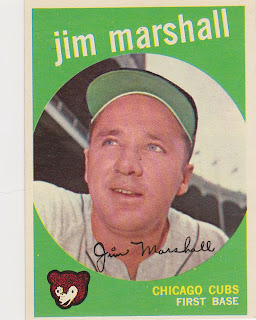 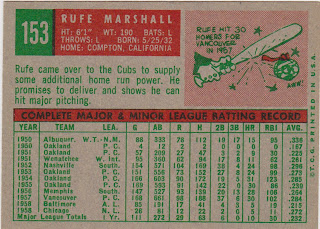 I'd venture a guess to say the two closest things to major league baseball without actually being the majors have been the old independent PCL and the Japanese Leagues. Jim Marshall spent quite a bit of time in both of those, and he got in five seasons in our big leagues as well.

Marshall signed with the White Sox in 1950 and for the next eight seasons he put up some big power numbers with the Oakland Oaks of the PCL and various farm clubs in the Sox, Giants and Orioles' chains.

He debuted with the Orioles in 1958, was the regular first baseman for awhile and in August was waived due to his .215 average and went to the Cubs. His averages continued to be low while his power, so good in the minors, dried up against major league pitching. 1959 was his busiest and best big league season. He got into over 100 games with the Cubs and had 11 homers and 40 RBI in nearly 300 at bats.

He spent two seasons with the Giants, was sold to the expansion Mets for '62 and then was traded to the Pirates in May. While a member of the Mets he became the first player to homer in consecutive games for that club.

Following his tour with the Bucs he went to Japan and played three seasons over there.Since his playing days he has been a coach on two continents, managed in the big leagues for both the Cubs and A's and is currently in the front office of the Arizona Diamondbacks as Senior Advisor, Pacific Rim Operations.

That's an Orioles uni Marshall is wearing at Yankee Stadium on this '59 card. Love the facade and flags flying on top of Yankee Stadium. So many memories.

Marshall is the victim of a very shoddy airbrush treatment on his 1961 Topps card. Just look at the cap. 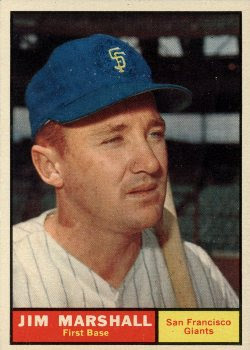