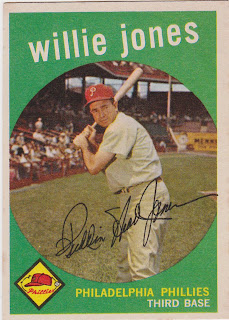 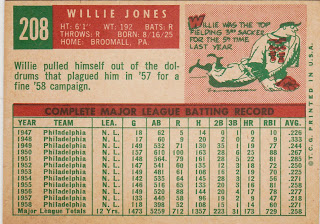 This, my friends, is Willie 'Puddin' Head' Jones. You have to love a guy who uses that nickname as his signature. 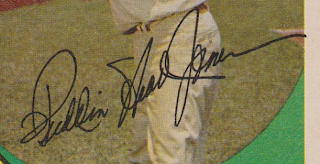 He was a ten year starter at 3rd base for the Phillies from 1949 through 1958. He was a contributor to the 1950 Whiz Kids club in Philadelphia and had his best season that year. He had personal bests in hits, runs, triples homers and RBIs. He played in a league high 157 games that year which isn't easy given the 154 game schedule.

Jones had signed with the Phils in 1947 and was brought up for an 18 games trial that year. He got a similar look in '48. He took over at third in '49 and kept the job for a decade as noted. On April 20th of 1949 against the Braves he had four consecutive doubles. Seems odd that guy could get four doubles in a game and not score a run. He made two NL All Star squads. In 1950's 14 inning game he played the whole game at third and went 1 for 7. That's a record for most at bats in an All Star game.

In the 1950 World Series he had four hits in 14 at bats. That was his only postseason experience. He was moved twice in 1959, traded from the Phils to the Indians and then sold by the Indians to the Reds. He played in just about half the Reds' games in that season and the next but was let go early in the 1961 season. Had he lasted he would have been around for the Reds pennant that year.

The story of how he got that distinctive nickname isn't clear. This blog post asked the question and the replies varied from his name coming from a popular Rudy Vallee song to his daily intake of liver pudding(!) and a few in between. The actual story seems lost to time.

EDIT: I forgot to mention that it looks like the Polo Grounds is the site of this card's picture. There have been others shot there but this angle gives a look that I don't recall before.

Here is a bonus picture of Puddin' Head that ran in Life magazine. I'm including it here because I like it. He looks like he should be named Puddin' Head, doesn't he? 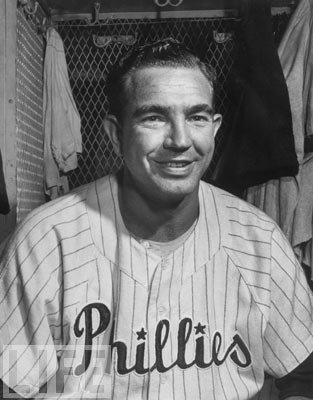