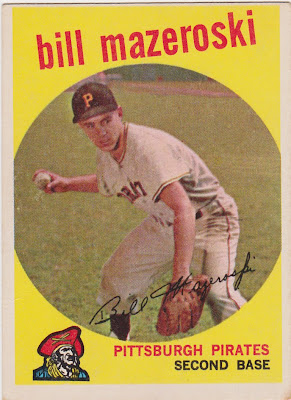 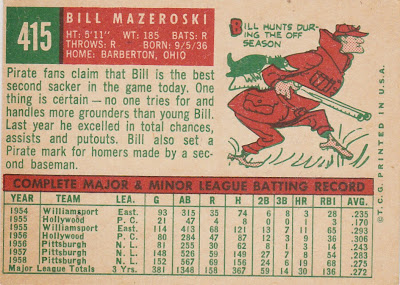 Hall of Famer and Ohio native Bill Mazeroski was about 21 when this picture was taken. He looks about 16. He was a few years away from his great moment in the sun....the famous World Series winning homer off Ralph Terry to win the 1960 World Series for the Pirates.

Maz is a Hall of Famer having been elected 12 years ago by the Veterans' Committee. There was talk at the time that he wasn't deserving due to his batting numbers. But for me there needs to be some recognition of the part that defense plays in the game. And besides, if Pop Haines can be in the Hall, Maz should be there as well. Hell, if Pop Haines can be in the Hall so should Mike Cuellar, Dennis Martinez, Virgil Trucks and about 150 other pitchers I can name off the top of my head. But I digress.

Maz was signed by the Pirates in 1954 and debuted with the Bucs in 1956. A year later he took over a 2nd base job that he held for 12 seasons. He was a seven time All Star and won seven Gold Gloves. While never know for his stick it's not like he was an automatic out. He had a .260 career average which is pretty respectable given the era he played in. And he hit 138 homers, six times totalling in double digits. His postseason batting average of .323 is something to be proud of as well. This is Maz' second appearance here, his All Star card in this set was posted almost a year ago.

Maz has two World Series rings. Although he was close to the end of his career and was no longer an everyday player he did help the '71 Bucs to a title.

Interesting article posted here that compares the careers of Maz and another fine fielding second baseman, the Royals' Frank White. The author makes the case that Maz and White had similar careers but Maz made the Hall based on his WS homer.

Sports Illustrated looked back at the 1960 World series with a 40 year anniversary story in 2000. I have not read it all but it looks interesting.

Hard to imagine anyone not having seen this before but here is the late, great Chuck Thompson's call of the Maz homer.

Here is a 10 minute newsreel report of the final game of the Series.