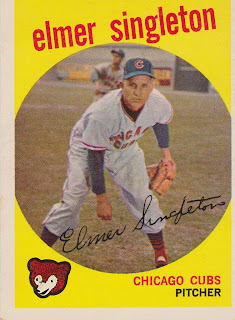 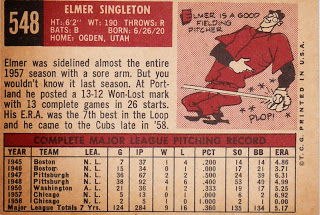 Righty pitcher Elmer Singleton threw his first pitch as a pro in 1940 in Wenatchee, Washington as a newly signed Yankees prospect. 24 seasons later, in 1963, he completed a circle of sorts as he threw his last one in Seattle, Washington for the PCL Seattle Rainiers.

In between Singleton pitched in 8 major league seasons for the Braves, Pirates, Nats and Cubs. His two complete seasons in the bigs came with the '47/'48 Pirates. He never won more that four games in a year and finished with an 11-17 mark. His last big league season was the year this card was issued, 1959.

He made 526 minor league appearances including 342 staters. His record was 184-186 and that a lot of decisions. His best seasons came in the early to mid 50s with the PCL's San Francisco Seals a a couple of other clubs. From 1952 through 1961 he won in double digits 8 of 9 seasons including 17, 18 and 19 win years. His ERA was never over 3.40 in those years and frequently much lower.

After finally retiring Singleton worked for a car dealership in his native Ogden, Utah. He died in 1996.

On his card Singleton has the slightly road weary look of a guy who has 20 seasons of baseball behind him. I'm not really sure where this was taken. Even blown up the picture doesn't reveal much in the way of clues. It doesn't quite strike me as the Polo Grounds or either of the West Coast parks. There is a slight Ebbets Field 'vibe' to the picture but the seating/wall arrangement looks wrong. I'll have to keep digging, because this stuff is oddly important to me.
Posted by Commishbob at 6:30 AM