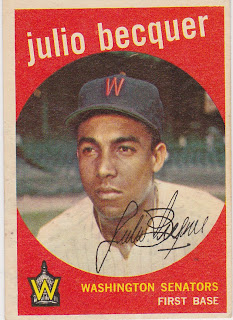 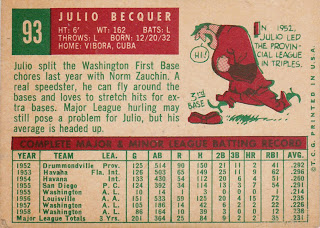 "Money is secondary with me," [Julio Becquer] said. "I love the game and I believe this is true of most major league players. In fact, many would play for nothing because they love the game so much."

That comes from a 1958 interview of Julio Becquer that is quoted on his Baseball Reference Bullpen page. Hard to imagine a player saying that today. Becquer was signed by the Washington Senators out of his hometown of Havana, Cuba in 1952. He was a student who worked as both a bookkeeper and ballplayer in Havana. He is one of a number of black Cubans tagged by the legendary scout/entrepreneur Joe Cambria and signed by the Senators.
Becquer played a season of stateside baseball when he signed with the Nats and then, still their property, played two seasons at home in Havana. He got his first look at the majors in 1955 with a 10 game trial and returned to the minors in '56. For four seasons, through 1960, Becquer played as a part time first baseman and pinch-hitter for the Senators.
He was drafted by the expansion Los Angeles Angels for the '61 season but barely was fitted for a halo before he was sold to the Phillies in May who assigned him to Buffalo. He was then sold again, back to the Twins (the former Senators) in June.
Becquer spent most of the '62 through '64 seasons playing in Mexico. But he returned to the Twins for one game in 1963 to qualify for his pension. He pinch ran and scored in that game which is a nice touch for a guy who by all accounts was a very nice man.
I'd be willing to bet that Bequer, if asked, would list his July 4, 1961 pinch hit walk-off grand slam as his career moment. It beat the White Sox 6-4 and came just two weeks after he homered as a pinch hitter leading off the bottom of the ninth to beat Jack Fisher and the Orioles, 5-4. That homer marked both the first walkoff and first pinch homer in Minnesota Twins' history. It was an especially sweet dinger for the Twins because after leading 4-1 they were tied in the top of the ninth by a three run homer off the bat of Earl Robinson.
This card shows Becquer in what appears to be his home pinstriped Nats uni but the stadium behind him looks like Yankee Stadium. But I'm pretty sure is Griffith Stadium. There have been several other Senators in pinstripes in that same pose/spot on their cards. When you look at Roy Sievers' card you can see the differences. I conclude that: 1) Becquer is posing in Griffith and 2) I'm likely the only person in the free world who actually gives this any thought.