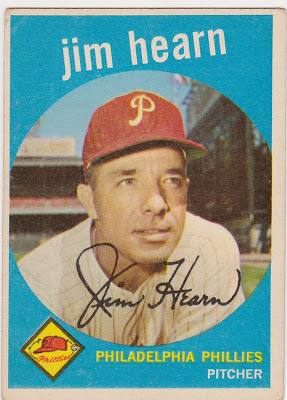 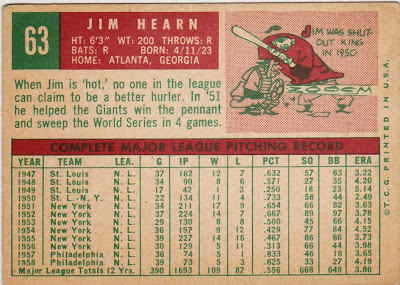 In 1959 pitcher Jim Hearn was at the end of his baseball trail. He pitched in 6 games, didn't win any and was released by the Phillies in May, a few months after this Series One card was released. But he'd had a pretty nice career previously, winning 108 games with a solid 3.81 ERA and getting himself a World Series ring with the 1954 Giants.

In 1942 the Cards signed Hearn, a native of Atlanta, out of Georgia Tech and he had a good season of Class B baseball before he was off to the military for three years during WWII.

When he returned in '46 he got in another year in the minors and debuted with the Cardinals in 1947. He went 12-7 that season, slid just a bit in '48, split the '49 campaign between the Cards and the minors and found himself waived to the Giants in July 1950.

He returned to his rookie form with the Giants, went 11-3 the rest of that '50 season, pitched five shutouts and won the NL ERA crown. Not a bad year for a guy who was essentially a late inning mop-up man for the first three+ months of the season.

In 1951 the Giants relied on Hearn as a #3 starter behind 20 game winners Sal Maglie and Larry Jansen. Hearn won 17 games and went on to win his only start in the Series that year against the eventual champion Yankees.

Hern remained a part of the Giants' rotation through 1956 and won 14 games in '52 and '55. In the Giants 4 game sweep of the Indians in that year's World Series Hearn, by now the clubs' fourth starter, didn't see the field.

Despite a nice ERA he went 5-11 for New York in 1956 and was traded to the Phillies that October. He spent two seasons pitching out of the Phils' bullpen and then, as noted, was released in 1959. He was charged with a loss, the final decision of his career months after his release due to a May game being suspended. He was 'on the hook' for that game and when it was completed in July he took the loss.

Hearn hit two inside-the-park home runs in his career. One came in a game in July of 1955 in which he also hit fence-clearing homer. Pretty remarkable to have two 'leg' homers given that here have been only a total of eight hit by pitchers since 1954.

Hearn's card features a view that you don't see often (or ever?) in this set. Behind him looms the far left field/center field grandstands of Connie Mack Stadium. Over Hearn's left shoulder is the scoreboard which is topped by the Ballantine Beer sign.

"Make that three ring sign, Ask the man for Ballantine"