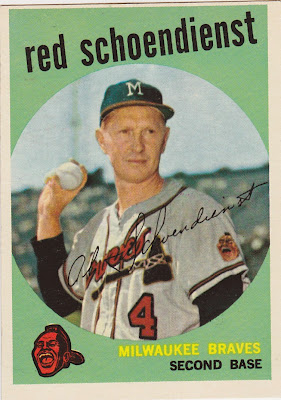 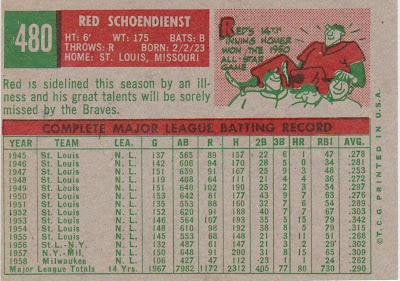 Now that's a baseball card, right? Love the Braves' road flannels, the "M" cap and the seafoam green frame. But I think Hall of Fame member, 'baseball lifer' and revered Cardinal 'ambassador' Red Schoendienst deserves a nice card. He's been involved in the professional game since 1942! At the age of 90 he is still in uniform during Spring Training during the season is still serving as a special assistant in the St. Louis front office.

Albert 'Red' Schoendienst was signed by the Cards in '42 and he spent 2+ years in the minors including a 1943 season that saw him hit .345 and win the Piedmont League's MVP. He joined the Army late in 1943 but received a medical discharge due to an eye injury and he returned to baseball during the 1944 season. That injury hampered his hitting while batting right handed against righty pitchers so he taught himself to become a switch hitter.

He made the Cards as their starting second baseman in 1945 and promptly led the NL in stolen bases. The next season he made the first of his 10 All Star teams. He led the league in doubles in 1950 and his batting averages improved as he played with a high of .342 in 1952. He won the first of his World Series rings with the Cards in 1946.

He spent eleven full seasons as the Cardinals infield anchor but was traded to the Giants in June of 1956. Almost a year to the day later he was traded to the Braves. Not often that the league base hit leader is a guy who was traded in mid year. He won his second ring that year as the Braves beat the Yankees.

1958 was his last year as a regular and he was signed by the Cards for the 1961 season. He played part time in St. Louis for a couple of seasons before becoming a coach. When Johnny Keane quit following the Cards' 1964 Series win Red took over (a deal with Leo Durocher apparently fell through) and remained the Cardinal skipper for 12 years. He also served two stints as an interim manager when asked by the Cards. His overall winning percentage as a manager was .522 and he won a World Series in 1967.

Quite a baseball resume for the guy. In fact Wikipedia passes along this bit of Red Schoendienst wisdom:

Schoendienst was a member of five winning World Series teams, all of which won in seven games: as a player with the Cardinals and Braves in 1946 and 1957 respectively; as the Cardinals manager in 1967; and as a Cardinals coach in 1964 and 1982. He was also a member of three teams that lost the Series after leading three games to one: the 1958 Milwaukee Braves (to the Yankees), the 1968 Cardinals (to the Detroit Tigers), and the 1985 Cardinals (to the Kansas City Royals).

As noted Red Schoendiest is still involved with his club after celebrating his 90th birthday. We should all be so lucky. I know he was working with the team during the regular season as late as three seasons ago. We saw him on the field, in uniform before a Cardinal-Astro game at Minute Maid Park.

One final set of quotes courtesy of Wikipedia: