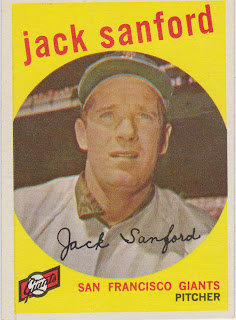 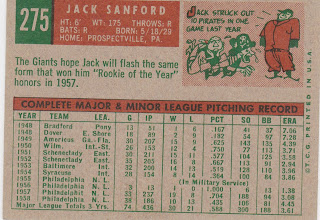 If the term 'bad ass' had been popular back when pitcher Jack Sanford was active, he'd have been called one. He threw hard, didn't always know (or care) where the ball was going, and once was suspended for 10 games for refusing to give up the baseball when his manager came out to take him out of a game. That's bad ass.
Sanford tried out at a Red Sox camp in 1948 after high school but they thought he was too small and he wasn't signed. A Phillies scout had seen his performance and offered him a contract and he pitched until 1954 in their chain. He spent a year in the military and in 1957, his first full season in the bigs, he won 19, lost only 8 and posted a 3.08 ERA to earn NL Rookie of the Year honors.
He was hit with the sophomore jinx in 1958 and his numbers slipped. The Phils traded him to the Giants for Valmy Thomas and Ruben Gomez in a move they regretted soon enough. Sanford rebounded and pitched very well in San Francisco for five seasons. His best year was 1962 when he won 24 games and finished second in the Cy Young voting. 16 of those 24 wins came consecutively. In 1963 the workhorse started a league high 42 games. (It's a different game today, Phil Niekro was the last pitcher to start that many, taking the mound 44 times in 1979.)
Sanford started three games in the 1962 Series for the Giants. He went 1-2 against the potent Yankee squad. He pitched very well in the series and in Game 7 he started and allowed only one run. Sadly for the Giants his club was shutout by Ralph Terry in the deciding game. Each of his Series starts, in fact, came against Terry.
He remained in the majors with the Giants, Angels and A's before retiring after the 1967 season and left with 137 career wins. Following that he coached for a couple of seasons in Cleveland and worked as a country club director.
Sanford died in 2000 of brain cancer. A well written blog post reminisces about his career. That's likely a Polo Grounds shot of Sanford in his Phils uni with a barely visible airbrushed SF logo on his cap.