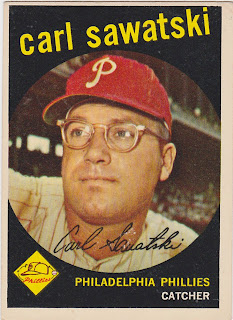 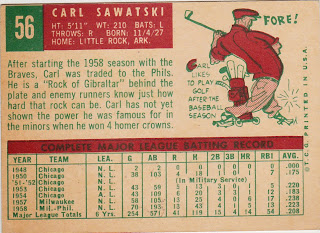 From his signing with the Phillies in 1945 at the age of 18 until his death in 1991 Carl Sawatski spent nearly his entire adult life in the game of baseball. Born in Pennsylvania but raised in Little Rock Sawatski spent four seasons in the minors as the property of three different franchises before he debuted with a handful of at bats in 1948 with the Cubs. Prodigious power numbers in Nashville in '49/'50 earned him another look at big league pitching before Uncle Sam called and Sawatski gave two years to the military service. His minor league exploits are chronicled here on the Nashville Sounds website.

Returning to baseball he played another season for the Cubs before being traded to the cross town White Sox. He didn't hit much for either club and found himself back in the minors in 1956 and then returned to the bigs with the World Series champion Braves in 1957 as a back-up catcher. He got a couple of Series at bats and a ring for his efforts.

After retiring he became the GM of the Arkansas Travelers in the Cards chain and then served as the president of the Southern League until his passing.

And note that the Phils cap on the logo is missing the red ink. From a quick googling it appears all the '59 Sawatski cards suffered from this. It is not listed as a variation or error on this usually reliable list. Perhaps printing anomolies are not considered errors/variations.
Posted by Commishbob at 6:30 AM