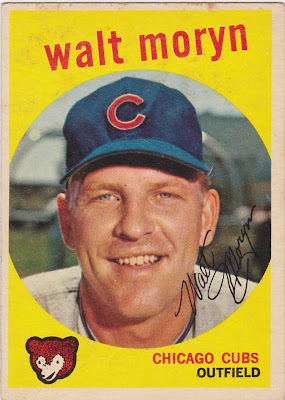 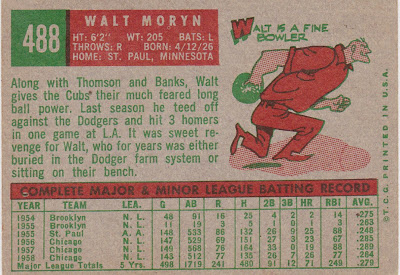 Outfielder Walt 'Moose' Moryn served a six and a half season apprenticeship in the Brooklyn Dodgers' chain before getting his shot with the Bums in June of 1954. Called up to serve as a left handed hitter off the bench, Moryn got a chance to play every day when Duke Snider got hurt. He took advantage of the chance and went 9 for 14 in his first three games.

Snider returned soon but Moryn remained with the Dodgers, mostly  as a pinch hitter, the rest of the season. He hit .275 for the year but found himself back in the minors for most '55. Such was the life of a guy stuck in the extremely well stocked Brooklyn chain. He was traded to the Cubs after the year and got a chance in Chicago to play every day.

He took over a regular outfield slot in Wrigley and stayed in front of the ivy covered walls until June of 1960. During his time with the Cubs he hit a respectable .272 and slugged 84 homers. He had career highs in batting average (.289) and RBI (88) in 1957. He made his only All Star team in 1958 although he did not get into the game.

Moryn's shining moment on the North Side came when he made an outstanding shoestring catch of a sinking line drive robbing Joe Cunningham of a two out hit in the ninth inning to save Don Cardwell's no-hitter against the Cardinals on May 15, 1960. The Cards must have been impressed with that effort as they obtained Moryn in a trade with the Cubs in June of that year.

He didn't hit much for the Cards and exactly a year after trading for him, the Cards traded Moryn to the Pirates where he spent the second half of his final season. After baseball Moryn worked in his family's retail business before he opened a bar in Cicero, Illinois.

Moryn's (very long) SABR page tells of his days as one of 700 Dodger hopefuls in his early spring trainings and also gives evidence of how well thought of he was by his teammates. Here is a small excerpt:


Among those who remembered Moose was Cardwell, whose no-hitter was nearly overshadowed by the drama of the game-saving catch. “He made me famous,” Cardwell told Jerome Holtzman for an obituary in the Chicago Tribune. “After I threw the pitch, I was leaning down with him and saying, ‘C’mon, Moose, make the catch.’“He was a good man, a ballplayer’s ballplayer. After the game I told him, ‘Moose, I owe you a beer.’ And he said ‘I’ll take you up on it.’ He enjoyed life. And he enjoyed people. He always drew the biggest crowd.”Another Cubs teammate was fellow St. Paul native Jerry Kindall, who was just 21 when he first arrived in Chicago fresh from the University of Minnesota. Kindall told Holtzman about his first encounter with the Moose. “I walked into the clubhouse and there was Walt,” Kindall said. “He was wonderful to me. He shepherded me around. He gave the appearance of a very gruff guy, but if you were a teammate, you saw through that in a hurry. He was really a tender-hearted guy.”

Late edits... I forgot to mention that Moryn already appeared on a special multi-player card in this set and I fixed my mis-spelling of Duke Snider's name. I've fired my editor so maybe Night Owl will forgive that egregious error.