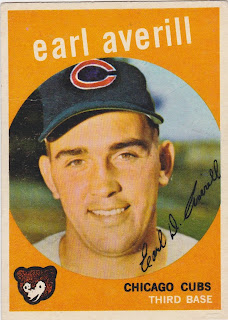 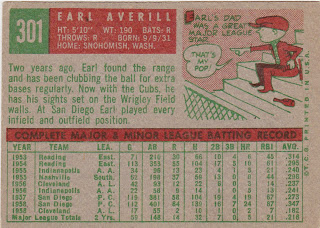 If the name is familiar it's probably because 3rd baseman Earl Averill is the son of Hall of Fame outfielder Earl Averill. Earl the Younger is not a 'Jr.' because his father's name is actually Howard Earl Averill. Sadly our Earl doesn't carry a spiffy nickname like his father's "The Earl of Snohomish" (which was shared, btw, with another Snohomish, Washington native, Earl Torgeson).

Earl Averill was signed (six days after my birthday) by his father's team, the Cleveland Indians, as a catcher. He was converted to an infielder in the farm system and got quick looks at the majors in 1956 and 1958. He was dealt to the Cubs prior to the '59 season and spent that year shuffling around the field playing 3rd, the outfield, behind the plate and some at 2nd base. He hit 10 homers in 186 at bats that year.

In 1960 he was traded by the Cubs to the Braves, spent a month in the minors and was then dealt to the White Sox. After that tumultuous year he was drafted by the expansion Angels. He had his best season in '61, hitting .266 with 21 homers and 59 RBI. He tailed off after that, spent a year with the Phils and a couple in the minors before retiring.

Looks like Topps' airbrush department caught a break with this card. They were able to take the Indians' 'C' on the cap in this photo and smooth it out to resemble the Cubs' logo 'C'. Probably fooled kids in 1959, as long as they didn't really look too close.