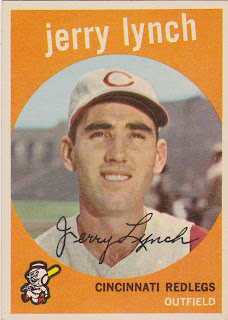 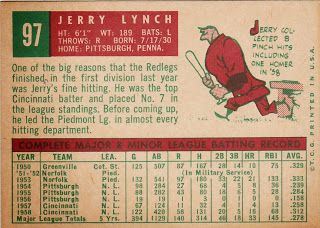 If I had a buck for every guy in this set that played one season of minor league ball and then went into the service, well I'd have enough to upgrade this set quite a bit. But my Jerry Lynch wouldn't require upgrading, it's pretty sweet.

Anyway, Lynch, who played six and a half seasons with the Pirates sandwiched around six and a half with Cincinnati, is known as one of the game's best pinch hitters. As of this writing his 116 pinch hits ranks him tenth on the all time list. When he retired his 18 pinch homers was the best of all time and he still ranks third in that category.

When he returned from the service after the Korean War he played a season in the Yankee chain and then was drafted by the Pirates. He got 300 plate appearances  with them in 1954 and '55 but he hardly played in 1956 (injury?). The Reds drafted him from the Pirates and he he carved out a place for himself there as an outfielder and key man off the bench.


In his New Bill James Historical Baseball Abstract, James made a case for Lynch being named MVP for his 1961 heroics:
"He hit over .400 as a pinch hitter with power and played 44 games in the outfield. His slugging percentage of .624 and 50 RBI in 181 at-bats was a far better rate than Roger Maris had that same season, hitting 61 home runs," James wrote. "More than that, Lynch had big, big hits; game after game, when the Reds were in danger of falling short, Lynch came up with the big hit to put them back in front, and the Reds, picked to finish sixth, won the pennant."

Lynch got three at bats in the '61 Series and went hitless but was issued an intentional walk. After retirement he and former teammate and friend Dick Groat were in the golf course management business together.  He was selected as a member of the Reds' Hall of Fame in 1988.
Posted by Commishbob at 6:30 AM