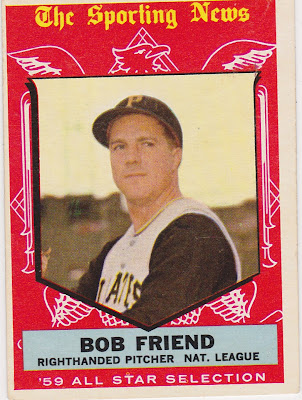 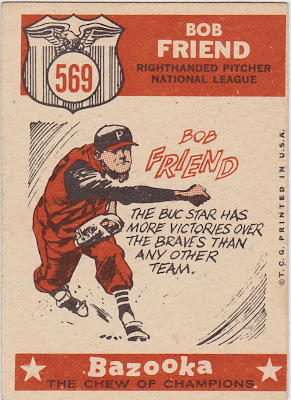 Poor miscut, badly scanned Bob Friend. Seems his '59 All Star card can't catch a break. This is his third and final appearance in this set. He had his regular card featured here in 2011 and then he showed up on a special multi-player card, Buc Hill Aces, with Ron Kline, Vern Law and Roy Face last year.

I hadn't realized that he started the fateful ninth inning in Game 7 of the 1960 Series. He came in with a shot to close it out but quickly allowed two hits before he was replaced by Harvey Haddix. Haddix allowed those runners to score and the Yanks to tie the game at 9-9. We all know what happened in the bottom of that inning. The card of the central figure in that dramatic game is queued to post in a few days.

As is the case with most of the Pirates photographed around this time, Friend is shown wearing a batting helmet. The batting helmet was designed by Charlie Muse, an executive of Branch Rickey's company and Rickey, at the time the Pirates' president, decided that all his players would wear one both at bat and in the field.
Posted by Commishbob at 6:30 AM