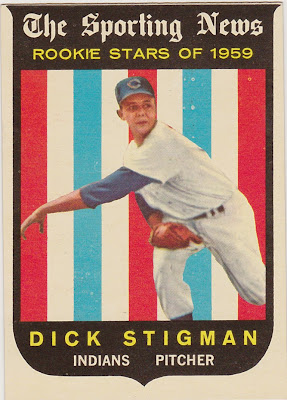 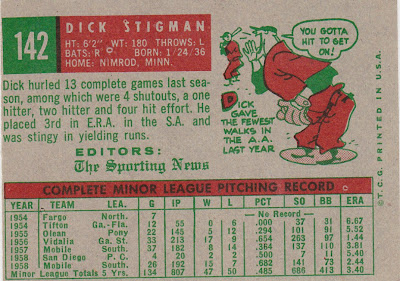 I can usually count on the Baseball Reference 'Bullpen' page for some tidbits about a player I'm posting. Apparently the guy who did Dick Stigman's page was in a hurry. Here it is in it's entirety:

In 1965-66, Stigman became the first pitcher ever to make ten consecutive starts without a decision. This is still a record, although it has been tied by Randy Lerch and John D'Acquisto, both in 1977.


OK, so I turn to the ever trusty SABR bio project and sure enough I learn that:

1) Dick Stigman was signed out of Minnesota by the Cleveland Indians' Cy Slapnicka, the same scout who signed Bob Feller, Bob Lemon and Herb Score.

2) Stigman was picked for the All Star team by White Sox manager Al Lopez but sat out both of the games played that year.

3) He was a member of the 1965 Twins that made the World Series but didn't get into a game.

4) On May 26, 1959 while pitching for San Diego, the AA affiliate of the Indians he pitched 10 and two third innings of no hit baseball. Unfortunately he chose to shine the same night Harvey Haddix pitched his incredible 'Almost' Perfect Game. Stigman's feat got buried on the back pages.

Stigman pitched six years in the minors before his 1960 debut. He went 5-11 that year which makes one wonder why Lopez tabbed him for the All Star team. It was not a case of needing a Cleveland rep since Vic Power was on the squad. Looking at his 1960 game logs shows that Stigman was 4-4 when the squad was likely chosen but he had a decent ERA. It also shows he walked 10 batters(!) the day before the July 11 All Star Game for the Indians against Al Lopez' White Sox(!!). But the AS game was being played in Cleveland so I can see Lopez asking him to "come back tomorrow, kid. You can't possible do worse than you did today."

He was traded to the Red Sox for the 1966 season, lasted one year and was traded again, this time to the Reds. He spent the '67 year pitching in the Reds' chain and then retired.