This is third installment of my breakdown of the '59 Topps set. This one looks at the National League cards. First up is a summary of the base one player cards. (The AL and a whole set summary were in my previous posts.) 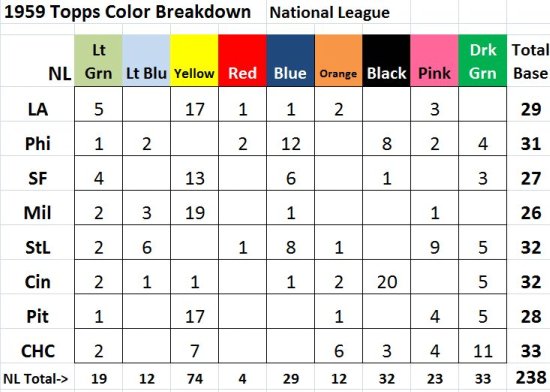 NL Observations: .......No one team had a single color dominate as thoroughly as the Tigers were covered with red to the tune of 84%...... Milwaukee's 19 of 26 in yellow led the way (that's 73% if you are scoring at home)..... The NL got 32 of the 33 total black framed cards in the set..... The NL has just 4 of the 95 red cards. The Phils, Cards and Reds each had seven different colors...... The Braves, Giants and Pirates had five...... Dodgers and Cubs had six different colors...... The Braves coming off two consecutive World Series appearances had the fewest base cards while the fifth place Cubs had the most.

And this chart breaks down the ancillary NL cards. Again 'High Lites' refers to the Baseball Thrills subset. 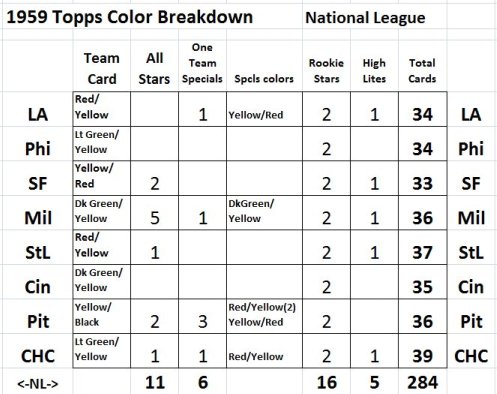 NL Observations: .......the Braves get a boost in their total card count with the All Star Selection subset but unlike the Yanks their total still ranks behind several other NL clubs.... every team card in the Senior circuit has yellow as one of its elements... the NL has only six 'one team' multi-player specials but they have the Ashburn/Mays special and Robin Roberts appears one the Ace Hurlers card so that narrows the gap... the Pirates, second place finishers in 1958, were given three multi-player specials, all were red and yellow in one combo or another.... the Ashburn/Mays card is green and white which makes it the only NL special without a yellow element.

Final Thoughts.... Topps liked yellow in 1959, they used it on 14 of 17 multi-player specials, 14 of 16 team cards, and more than a quarter of all the base player cards.... I also noticed that the Cubs and Tigers team cards include the designation "Team" following the name i.e. "Detroit Tigers Team" as opposed to just "Detroit Tigers".. can't think of why that would be.... my preferred frame colors are black and dark blue which explains why I have so many favorite cards among the Phils' and Reds' cards.

That's it. I enjoyed doing the research. I know it all adds up to nothing but it does satisfy some of my curiosity about this great set. I would like to find a series breakdown by card number as that would give me another view of the color distribution. I just haven't googled deep enough to find it. And I'd bet someone out there has the set on uncut sheets. How cool would it be to lay them out end to end to see the color patern. Maybe spread out like that we'd see the yellow cards spell out 'TOPPS" or the name of Sy Berger's dog. Who knows.

It's back to regular card posting now. Thanks for reading. Comments always appreciated.
Posted by Commishbob at 7:19 AM