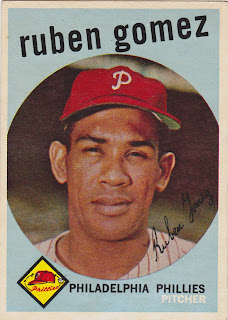 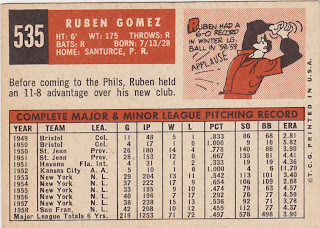 When you are known in your native land as "El divino loco (the divine fool)" as Ruben Gomez was in his native Puerto Rico, it says something about you. And it's probably not good. But according to his Baseball Reference Bullpen page Gomez was loved there.

He likely had a reputation there much like the one he cultivated here in the States, an erratic beanballer. Googling Gomez turned up stories of him nailing Carl Furillo and Joe Adcock with both encounters turning ugly. Also mentions is a beanball war with Sam Jones of the Cardinals in 1957 and his KO of Frank Robinson that ended with Robby in a hospital bed.

Then there was this much ballyhoo'd squabble he had with stateside teammate Willie Mays when the two were also together  members of the Santurce Crabbers in winter ball.

(Sidebar of Irony: Frank Robinson managed the Santurce club to a couple of championships during the early 80's.)

Anyhow, when Gomez wasn't denting heads or dusting chins he was winning 71 games for the Giants between 1953 and 1958. He led the league in walks once and finished as high as second in hit-batsmen twice. He was traded to the Phillies for 1959 but by then his career was winding down, at least in the USA. He pitched several seasons in Mexico after some 1962 looks with the Indians and Twins. He reappeared in 1967 to pitch 7 times for the Phils and was, at that point, the oldest player in the NL.

Topps was kind enough to airbrush Gomez into Phillie duds for this card. They even added pinstripes. It's a high number and in about average condition for my cards of that series. They cost more to upgrade than I'm willing to spend for the most part. This one will do just fine.