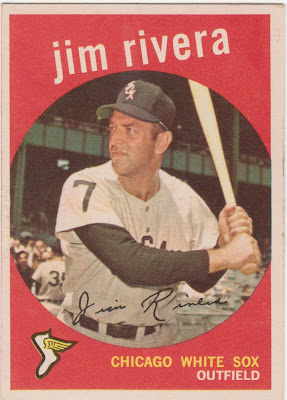 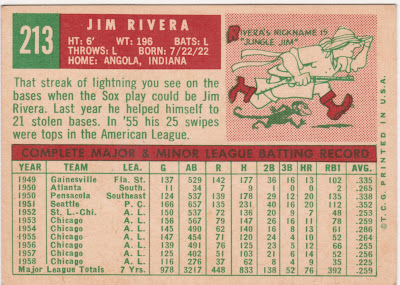 I really like this card. Red frames may be my favorite. Combine that with the White Sox cap and uni, and, most particularly, the really cool 'Flying Sox" logo in the bottom left and you have a great card.

Side note... that #35 in the background would be Bob Shaw if we assume this is a shot taken in 1958. Shaw looks to be chatting with his Bronx homeboys. Since Shaw came over from the Tigers in late June this could be from the Sox' trips to NY in July or August.  < /Dick Tracy mode  >

When I saw that Jim Rivera was included in the '59 set something pinged in the back of my mind. Googling him brought up a rather amazing post at Baseball Fever that gives more background on Rivera than I could (or would want to) cover here. It's pretty interesting and I recommend reading it.

The cartoon on the back of this card mentions his nickname of 'Jungle Jim". According to this post at Baseball by the letters he got it from Chicago sportswriters due to his 'all out' style on the bases and in the outfield. I'll leave any other connotations up to you.

Rivera did have a combination of speed and power finishing first or second in the A.L. in steals from 1952 through 1958. In each of his six second place seasons except 1954 he finished behind a teammate, either Luis Aparicio or Minnie Minoso. At the end of his career Jungle Jim was the oldest player in the league. Probably had 'lived' more than anyone else as well.
Posted by Commishbob at 9:25 AM