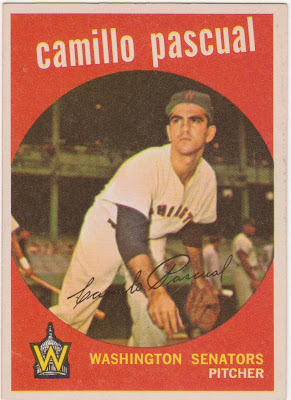 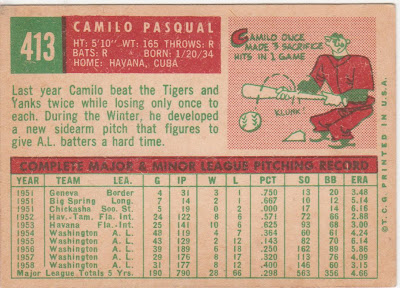 This card looks to be another Yankee Stadium shot with the righthander in a classic follow through pose in a red frame. Pretty nice copy of this one as well. Of course, it's somewhat off center. I hardly even notice after awhile.

Not to pick on Topps but, c'mon.... you spelled Cuban-born  Camilo Pascual's name wrong on both sides of his card, in two different ways! It's as if they said "OK, we stuck your face on Lumenti's card so we'll balance things out by screwing up your card." Pascual, to this point, had been a hard working, fairly average pitcher on lousy Nats clubs for about four or five seasons. He turned his game around in 1959 and won 17, more than twice as many as in any previous season. He made the first of his five A.L. All Star teams as well.

I saw him pitch live a couple of times as a Twin, the most memorable by far coming on a Sunday in 1963. It was another Yankee Stadium doubleheader. Pascual started the first game and in the bottom of the second inning a group of demonstrators jumped out on the field from near the Twins dugout and ran to the mound, wrapping him in a Cuban flag. I remember the incident and being aware of the whole Cuba/Castro vibe playing out at that time but it sure was a surprise. This was way before Morganna made running out onto the field chic. For years I searched for some documentation of the day. Finally, a few years ago, I found this page that discusses it as part of the larger issue of Cuban exiles in American baseball.  Then the other day I Googled the incident again and found gold! This was the picture I knew had to be out there somewhere but I'd never found. Corbis has the photo and even the original caption. I friggin' love the internet! Here's the shot: 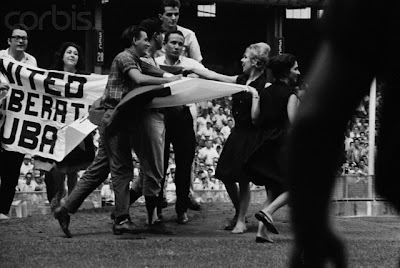 Posted by Commishbob at 7:47 AM