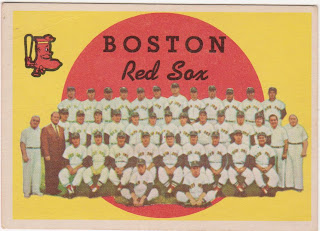 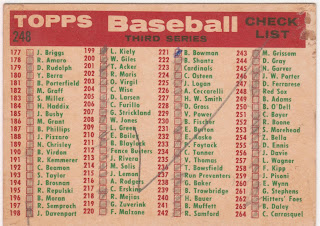 Take a look at the front of this Red Sox team card. Look closely at the top row, guy at the right end of that row. Yup, Ted Williams. Whats special about that is that he had signed a contract with Fleer for 1959 and they put out a complete set of Ted Williams cards. So this is all you'll see of The Splendid Splinter in the '59 set (unless he shows up in the background of another card someplace).

Here is what appears to be the original print from which this Topps card was produced. I've highlighted Ted's head, pun intended. 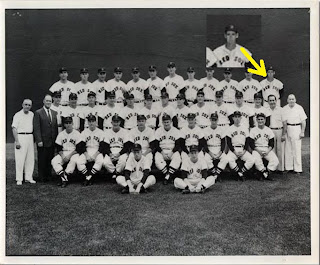 This is the first of the 16 team cards to be posted from the 1959 set. The 1959 Boston Red Sox finished fifth in the A.L. going 75-79 under three different managers. They were at or above the A.L. average in most hitting categories except batting average and at or below average in most pitching categories. Williams had a lousy year, hitting in the .250s with just 10 homers. his lowest complete season total. but he wasn't completely washed up. He bounced back for one more good season in 1960 and retired to concentrate on fishing, hunting and later managing the Washington Senators.

As with most of the team/checklist cards in my '59 set, the front looks somewhat better than the back. I don't remember actually marking the checklists but apparently a lot of collectors did because it seems like most of the ones I come across are marked. This gem even has a huge ass check on the back. Maybe the kid put that mark there when he completed the series. In this case it's the 3rd series.
Posted by Commishbob at 8:16 AM