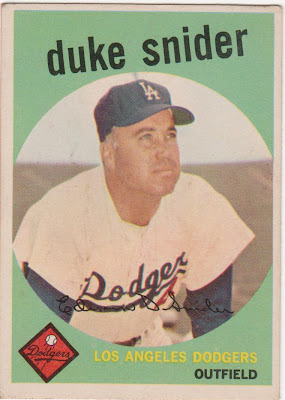 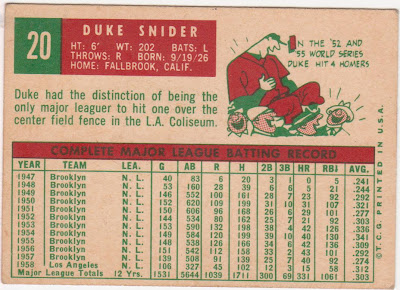 Edwin Donald "Duke" Snider died today at the age of 84.

The Duke of Flatbush played 18 seasons in the Majors. All but his last two seasons were with the Dodgers, eleven of those in Brooklyn. He, of course, is the 'Duke' part of "Mickey, Willie and the Duke" fame. Those three being centerfielders for the three New York franchises during the 1950s.

There will be a lot written about Duke Snider in the next few days so I won't attempt a real bio here but I do have one fact that will likely surprise, or even amaze, your friends. Who would you guess is the leading home run hitter during the decade of the 1950s? Willie Mays? Hank Aaron? Mickey Mantle? Nope, its The Duke.

This card was one of the first 'star' cards I acquired when I began this project. It's in better shape than the scan shows. Nice seafoam green framed shot of Snider in that iconic Dodger uniform taken in what I believe is the LA Coliseum. It even somehow conveys his reputation as one of the nicer guys in the game.