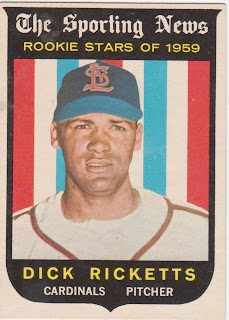 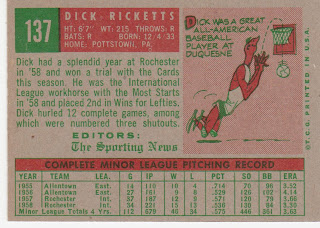 Here we have our first 'special' card out of the '59 set. I'm not overwhelmed by the Sporting News Rookie Stars cards but I don't find them hideous either. I think Topps improved on them in 1960 (the orange background cards) and 1961 (newsprint style cards).

EDIT.........my original post for this card was wrong. I had this card on the top of my stack, assumed it was 'Dave' Ricketts (he's the Ricketts brother I was familiar with) and wrote away, oblivious to the fact it was 'Dick' Ricketts' card I had just uploaded. What a stupid I am. Mike Clark caught my embarrassing gaffe and was kind enough to provide the Dick Ricketts background in the comments section without pointing out that I was/am such a dumbass. I'm reposting this using the info Mike provided. So I guess that makes him my first guest blogger! Take it away Mike Clark......................

Dave was Dick's brother, I believe - both played for the Cardinals - one was a pitcher (Dick) the other caught (Dave). Dave had the longer MLB career. Wikipedia says:Richard James Ricketts, Jr. (December 4, 1933–March 6, 1988) was an American professional basketball player.
A 6'7" forward from Duquesne University, Ricketts was selected by the St. Louis Hawks with the first pick of the 1955 NBA Draft. He played three seasons in the NBA with the Hawks and the Rochester and Cincinnati Royals and scored 1,974 career points. Ricketts, a strong 225-pounder, was drafted #1 overall by the NBA Hawks because he was also property of the Major-League baseball Cardinals. Pitching largely for the Rochester Red Wings, Ricketts became part of that NBA franchise there as well. When the team relocated to Cincinnati, the forward/center played the 1957-58 season there. Ricketts was affected by the tragic injury of teammate Maurice Stokes in March, 1958 and retired from pro basketball following that season.
Ricketts was also signed as an amateur free agent pitcher by the St. Louis Cardinals in 1955. In 1959 he appeared in 12 games for the Cardinals, including 9 starts. He had a 1-6 record, with a 5.82 ERA in 55 2/3 innings. His brother Dave Ricketts played six years in the major leagues.


The part about Dick being affected by the injury to Maurice Stokes is real interesting, isn't it? I remember seeing Stokes appear as a guest at some NBA games in the early 60s and his story being featured on the ABC broadcasts of NBA games during that time. Here is his page at Wikipedia.


Again, thanks to Mike Clark for his input and I hope anyone reading this with an interest in 59s won't be put off by my rookie blogger mistake.
Posted by Commishbob at 6:15 PM