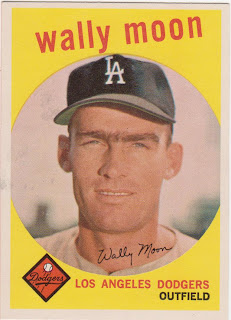 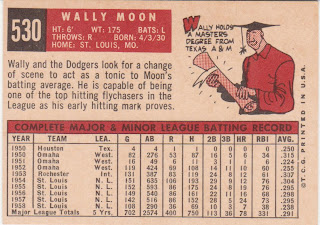 Wally Moon seemed to be avoiding me. I lost two or three auctions for his card and twice (twice!!) purchased it only to have the seller refund my money because it wasn't in stock after all. Finally nabbed this pretty nice specimen a week or two ago. It features nice corners, clean, bright front and back, yet another airbrushed cap logo and Wally's easily recognizable uni brow. It's a high number to boot.

The back of this one was full of stuff that I never knew... the fact that Wally was an Aggie ...err, excuse me...IS an Aggie. I'm told there is no such thing as a former Ag. Got himself a Masters degree no less. I also didn't know he played for the Houston Buffs, the cards top minor affiliate at the time.

The writeup mentions that the Dodgers were hoping that a change of scenery would 'act as a tonic' to his batting average. Seemed to work as Moon jumped back to a .302 average, his best since his Rookie of the Year season of 1954. The deal that sent Moon to the Dodgers brought Gino Cimoli to the Cardinals. Cimoli only lasted a year in St. Louis while Moon finished 4th in NL MVP voting for 1959 and had several more good years on the west coast before he retired after earning another ring with the '65 Dodgers.

Moon homered off the previously featured Dick Donovan in the sixth and final game of the '59 World Series. I didn't plan that. Those two cards just happened to be close at hand.
Posted by Commishbob at 6:16 PM