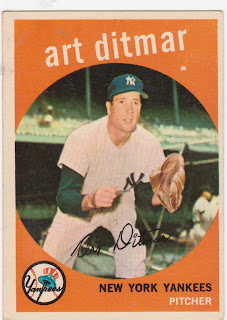 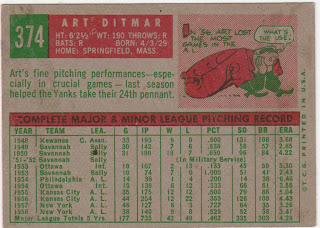 True confession time... I've always had a 'thing' for Art Ditmar. No, no... not in the same way I've always had a 'thing' for Jennifer Beals..... but a 'thing' nonetheless. I've got several of his cards. It began when I was a kid and the joke among my many Yankee fan friends was "Oh oh, you're screwed, here comes Art F'ing Ditmar!!"  Yes, most of my friends had precious little comedy talent. but that's another post. It was one of those inside jokes and we all became fans of the guy, even those of us who didn't root for the Yanks.
Here we see my man Art posed in Yankee Stadium with two of the upper deck posts framing his head. Those posts were the bane of my father's existence. We'd be there nearly every Sunday that the Yanks were at home and we'd have to be there early enough so that we could get general admission upper deck seats without a post hindering our view.
The card itself features a classic Topps pitchers pose, a cool orange frame and a gem of a cartoon that points out that Ditmar lost the most games among American League pitchers in 1956. Damn nice of them I'd say.
Art won 28 games for the Yanks over the 1959/1960 seasons before his career went abruptly south and New York graciously returned him to their 'minor league' affiliate in Kansas City, the A's.
And I can't let this post go by without a picture of Jennifer Beals. Still amazing looking at 47ish. My wife knows that I'd leave her for only one woman... 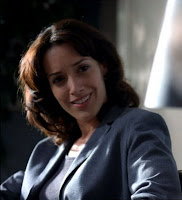 Hey, you take your ego trips, I'll take mine.
Posted by Commishbob at 1:36 AM