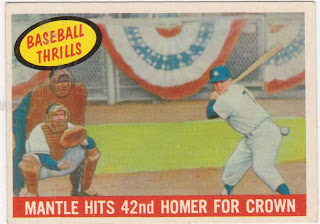 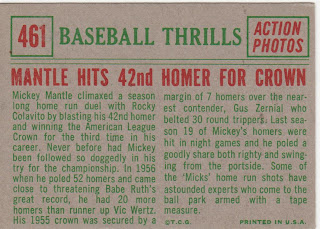 First look at the Baseball Thrills subset of ten cards numbered 461 thru 470. These commemorate 'on the field' achievements by stars of the day, not all of them coming from the previous 1958 season as I would have expected. The Willie Mays BT features his over the shoulder catch in the '54 World Series. And a couple, Banks Wins MVP for example, honor a general award or skill. We'll look at each at some point.

The backs of these describe the action or achievement and the box in the upper right of the reverse describes them as 'Action Photos'. They appear to be colorized versions of an actual photo. The Mantle above is concerned with the 1958 regular season homer chase and his close win over Rocky Colavito. But the photo of the Mick coiled to unload shows the bunting in the background that signifies a World Series shot.

This subset commands a premium above the regular cards of the same series but they are neither very expensive nor difficult to find, especially in ungraded, unslabbed form.

UPDATE: Corbis provides us with the original photo and indeed it is from the 1958 World Series. 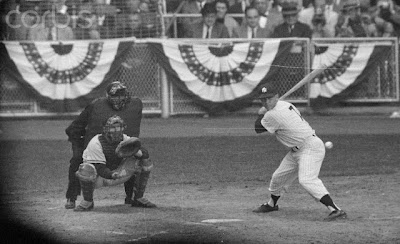 Posted by Commishbob at 4:38 PM