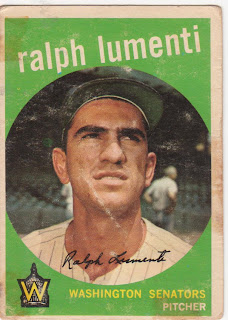 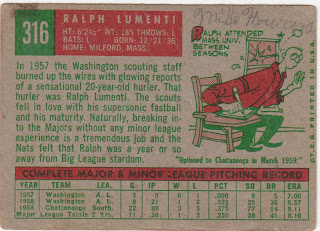 Poor old Ralph Lumenti can't catch a break. First of all, that's not even Ralph pictured on the card. Topps stuck about-to-be Nats ace Camilo Pascual on this one. In 1959 the two pitchers were going in different directions. The old bonus rule had Lumenti on the Nats' roster for '57 and '58 but he saw little work. He made a couple of brief appearances in late 1959 and was sent back to the Washington farm system where he kicked around for a few more seasons before entering the witness protection program*. Heck, he isn't even represented on his own cartoon! The guy sitting in the student chair is supposedly getting conked on the noggin with a blast we can only assume has been served up by Ralph. Either that or it's a wild throw he's uncorked. I wonder if Ralph got facial ticks from all this.

The Lumenti card was issued with and without the "Optioned to Chattanooga in March 1959" line below the cartoon. The 'with' version is more common. My example is pretty much beaten up, with very soft corners, stained, creased and scuffed. And, adding insult to injury, my Lumenti was 'autographed' by one of the card's former owners, Mike Howard. Did he do that with every card in his collection? Mike, you out there? I'm feeling like I need to upgrade this one, just to honor Ralph Lumenti. Just to see what he looked like here is his 1958 Topps card. 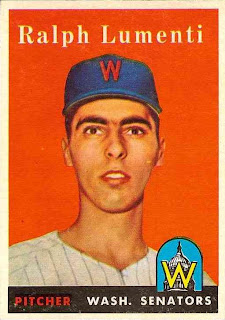 Meanwhile Camilo Pascual did a career 180 in '59 but I have a cool story that I'm saving concerning him. We'll see all that in a day or so.


*=I'm kidding. According to Wikipedia Ralph is still alive and I'm assuming has recovered from his slights at the hands of Topps.
Posted by Commishbob at 11:54 AM