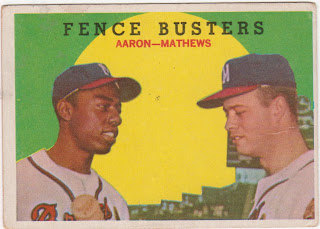 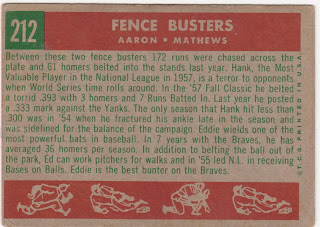 Among the 1959 set Topps scattered 'special' multi-player cards. With some exceptions these featured 2 or 3 teammates in posed shots with a write-up on the back. This (obviously ungraded) special is among my favorites largely because I admired both of these players and I really admired the classic Braves uniforms of that era.

Not much to say about either of these two Hall-of-Famers. Both were always class acts. I saw Hank Aaron hit a few homers, the most significant was #712 in the Astrodome. What I remember most about it is that I was at the game with a friend who was a big Braves/Aaron fan. He had fit when we overheard fans behind us disparaging Aaron home run totals because of the dimensions of Fulton County Stadium.

I saw Eddie Mathews play as a Brave at Shea Stadium in the 60s but nothing stands out. I did see him once as an Astro in 1967. My family had just moved to Houston and my father and I attended a game versus the Pirates. I was amazed at how green the turf looked and I spent a lot of time staring at the roof. He was dealt to the Tigers not long after that in a trade that brought Fred Gladding to Houston.

I hadn't realized until I found the game on Baseball Reference that Eddie Mathews was the Braves manager.
Posted by Commishbob at 7:41 AM