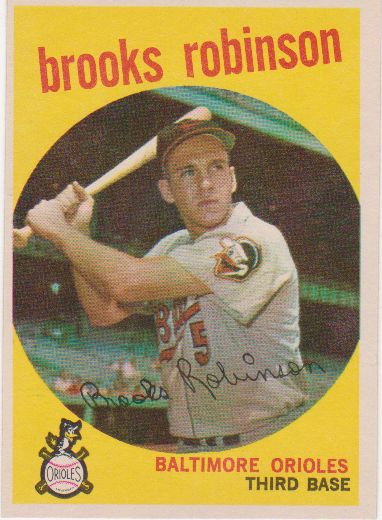 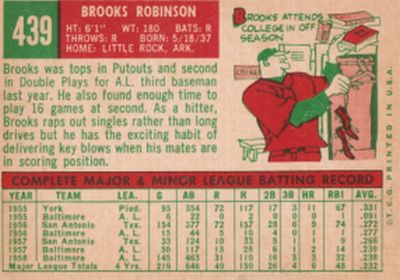 Welcome to the first of what I intend to be 572 posts in this blog. I'll be taking what I hope is a fun and informative look at the 1959 Topps set. The '59 set (along with its bookends, the '58 and '60 sets) is a huge favorite of mine. It's the first set I recall owning cards of. I remember friends that had 1958 cards but I don't think I had any. I clearly recall receiving packs of the 1959s at Easter of that year. (A couple of packs of cards in my Easter basket was a tradition in my house.) One '59 card from my youthful collection survived and I'll feature it in my next post. PSA's 1959 set page is entitled "Bring On The Pizazz". The set was a departure for Topps and it features some elements I always like on cards, bright colors and team logos.

I'll discuss more of this great set and my reasons for this collection in future posts but first things first... the Brooks Robinson card. Brooks leads off the blog for the simple reason that he's my favorite player. This is one of the nicer cards with good corners and bright colors. The card is off center but that's very common, at least among the 1959s that I've come across. Another very common aspect of this card is the fact that Topps photographed Brooks at Yankee Stadium. It's a 'feature' that will show up countless times in this set as well as many of the 50s and 60s Topps sets. I'm OK with that as it reminds me of the many visits I made to that historic ballpark in those days alongside my Dad, a big Yankee fan.

I love the O's road uniform that Brooks shows off in this shot. The 'Bird head' sleeve patch is a great uni addition. I wish the O's would bring it back.

This card is printed on 'white' stock as you can see on the scan of the back side of the card. The red and green on 'white' is one of three combos in the set. Many of the cards are also seen on gray cardboard and the last series, a.k.a 'high numbers' are red and black on 'white' cardboard. The cartoon on the back is pretty hum-drum. But we'll see some really good ones as the blog unfolds.

As I mentioned Brooks is my favorite baseball player. My twin sons are named for him and Jim Palmer. We've met Brooks several times and he's as nice as his reputation. When a small story appeared in the Baltimore Sun about my sons carrying the names of Oriole stars Brooks came up with my address and sent us signed pictures.
Posted by Commishbob at 6:33 PM