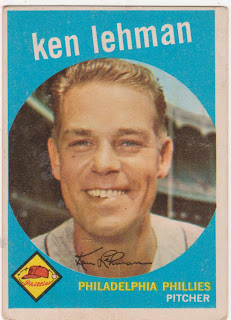 A nice thing about blogging this set is I'm learning a lot. I was only dimly aware that Ken Lehman had spent two seasons with my Orioles. I looked back and sure enough he's in the '58 set as a Bird. And his hair is so good he could compete with the numerous nice hair guys shown in the '65 Topps Project blog . Looks happy, doesn't he? He should be, wearing that Orioles uniform and posed with that iconic Yankee Stadium upper deck and facade framing his smile and pompadour.

Pictured here on a Phillies card he ended up spending a couple years in their farm system before making it back to the bigs in 1961.

Oh, yeah...... I also discovered that he was pitching in Brooklyn while I was living there as a little squirt just a long fungo from Ebbetts Field. I bet he rode a cab past our rowhouse a few times. I wonder if he ever saw me out front on the steps?
Posted by Commishbob at 11:16 AM