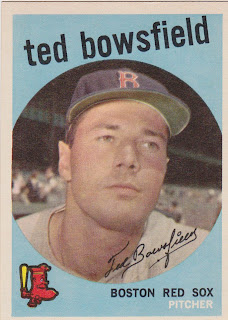 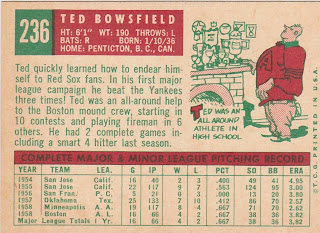 Ted Bowsfield is another guy who has a lot more interesting story than you'd think at first glance, mostly because he comes across as such a neat guy and one who truly enjoyed and appreciated his time in the big leagues.

He attracted scouts when he mowed down a visiting team of Cuban All Stars in an exhibition game at the age of 17. The native of British Columbia, Canada was signed by the Red Sox in 1954 and worked his way up through the organisation, debuting in relief in a game on July 20, 1958. That game was significant because the opposing pitcher, the Tigers' Jim Bunning threw a no-hitter at the Sox in Fenway. He went on to post a 4-2 record that rookie season with three of those wins coming against the Yankees. All that caused Casey Stengel to refer to Bowsfield as "the feller who throws them ground balls!".

Despite that early success he spent most of 1959 in the minors and was traded to the Indians during the 1960 season. He was drafted, returned and re-drafted (don't ask) by the Los Angeles Angels following that season and spent '61-'62 with the expansion club. He went 20-16 with the newest AL club including a career high 11 in 1961.

He was traded to Kansas City and pitched for the A's for two seasons before retiring after some minor league work in '65. His career record was 37-39 while pitching for a series of pretty weak clubs. He went on to hold front office jobs with a couple of big league teams.

Tom Owens has a nice interview with Bowsfield on his Baseball by the Letters blog. And Bowsfield is a member of the Canadian Baseball Hall of Fame and his page there has more details. And a Canadian baseball-centric blog post by Kevin Glew is a good read as well.

Hey, Bowsfield posed at Yankee Stadium for Topps. I'd like to think it was before one of the games he won over them.