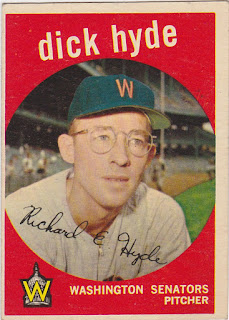 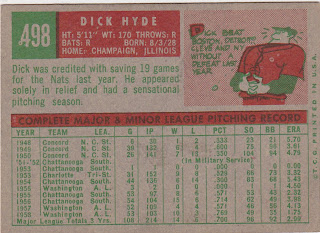 Dick Hyde's career, short as it was, is a testament to perseverance and drive. Signed by the Senators in 1949 the small framed right-hander struggled through six minor league seasons and served two years in the U.S. Army before he made any impact in the major leagues. This after grade problems cost him a chance at college success. Along the way he suffered rejection, arm misery, being mocked because of his unusual 'submarine' pitching style and lack of control of his pitches.

In 1957 he righted himself and went 4-3 for the Nats in 52 appearances, all but two out of the bullpen. In 1958 he appeared in 53 games and had a 10-3 record, an ERA of 1.75 and 18 saves, 2nd in the AL. Dick Hyde had arrived! But it was a short lived bit of glory. In 1960 he struggled and was traded in June to the Red Sox. He was quickly returned to the Senators and the deal cancelled because he had a sore arm and was sold to the Orioles a month later.

His time with the O's was brief and after some addition minor league work he was out of the game after 1961. Hyde worked as a stock broker, managed a gas station and worked for Illinois Power after retiring.

This 1958 feature in Sports Illustrated uncovers much of Hyde's back-story. It's a quick, interesting read.

Pictured on this card is Hyde and a baleful gaze towards the home team's dugout. I bet he's wondering how different his life would be if he had had that 1958 success here in the 'City That Never Sleeps'. He'd probably be rubbing elbows with Frank Sinatra at Toots Shor's club along with chums like Hank Bauer and Mickey Mantle.

On second thought, no way.