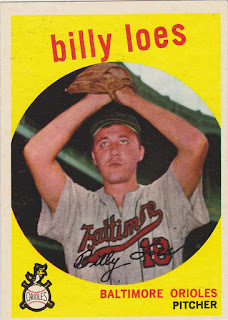 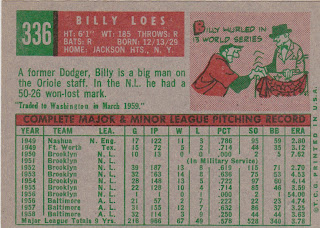 Billy Loes won 80 games in 11 seasons with the Dodgers, Orioles and Giants but he left behind a much bigger legacy as a character and 'eccentric'. The Long Island native was a Brooklyn Dodger signee in 1948 Loes had an impressive minor league season the next year and got a taste of the majors in 1950.

He spent '51 in the service and returned for begin a string of successful seasons in Brooklyn, going 50-25 in the course of four seasons. He pitched in three World Series for the Boys of Summer, winning a ring in 1955.

Sold to the Orioles in May of '56 he won 12 games in 1957 but never saw much success while hanging on through 1961 with the Giants. But as noted, Loes is remembered for his colorful and generally odd personality.

From a New York Daily News story published after Loes' death in 2010:


Dodgers Hall of Fame catcher Roy Campanella once said of Loes: "How can I say why he doesn't win 20 when I can't even tell what he's going to do from pitch to pitch."That was never more evident than in Game 2 of the 1955 World Series against the Yankees when Loes hurled three innings of shutout ball, striking out five and inducing three double play balls - only to suddenly get kayoed on five hits and four runs in the fourth. Said Campy: "He started thinking. He had 'em going on fastballs and curves for three innings when he suddenly decided to throw change-ups."Before the 1952 Series, Loes reportedly predicted the Yankees would beat the Dodgers in six games. Years later, however, he said he was misquoted. "I never said that," he insisted. "What I said was they'd beat us in seven games." Which they did.But perhaps the most infamous Loes episode occurred in Game 6 of the '52 Series at Ebbets Field when he claimed to have lost a ground ball in the sun. What happened was Yankee starting pitcher Vic Raschi hit a ball off Loes' leg that caromed into right field, scoring Gene Woodling from second and sending the Yanks to a 3-2 victory that tied the Series 3-3. They won it the next day. Everyone laughed when Loes insisted he'd lost Raschi's grounder in the sun, but as Dodger pitcher Carl Erskine later explained: "That's exactly what happened. At that time of the afternoon in Ebbets Field, the sun came through a space in the grandstand behind the plate and could blind you."