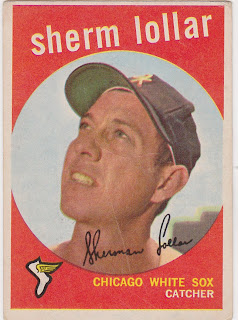 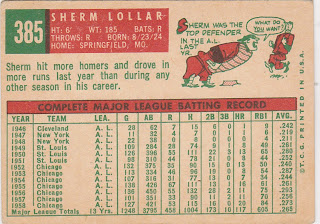 Sherm Lollar caught 1571 games in the majors beginning in 1946 with the team that signed him out of Pittburg State in Kansas, the Cleveland Indians. Add in more than 400 minor league games, any number of collegiate, exhibition, World Series (he played in two) and All Star games (he made 7 AL teams) and you have a guy who did a whole lot of squatting in his career.
And it was a very good if under-appreciated career. After his 26 game trial with the Indians in '46 he was traded to the Yanks. After two seasons during which he rarely got off the bench he was dealt to the St. Louis Browns where he blossomed into a first time All Star in 1950.
But it wasn't until a 1952 trade to Chicago's South Side that Lollar became a more consistent player and by the end of the decade he had collected three Gold Gloves, landed in the Top Ten in MVP voting twice and made the All Star squad six times in a span of seven years. With the 'Go Go Sox' of 1959 Lollar hit 24 homers (he had 22 in '58) and drove in 84 runs for the second year in a row.
A homer and 5 RBI against the Dodgers in the Series that season wasn't enough to help the White Sox become champs but Lollar had already earned a ring with the '47 Yankees. In that Series he went three for four with a pair of doubles as the Bombers defeated the Dodgers.
Lollar's playing time decreased as the '50s turned into the '60s and after the 1963 season he retired to coach in the majors and manage in the minors.
That makes it two red White Sox cards in a row. This one was also shot at Yankee Stadium (I know that scoreboard silhouette). Seems to me that Sherm is looking up at my Dad and me perched in our usual spot above and just to the left of home plate. He's smiling because he knows that I will be, as always, rooting against the Yanks. My Dad would laugh about that but I think is secretly pissed him off.
I believe, but can't substantiate,  that my first game at Yankee Stadium was in 1958. I KNOW it was a against that White Sox so maybe he really is looking up at us. Oh, Lollar may not get much love by later generations, but at least one writer thought a lot of him.