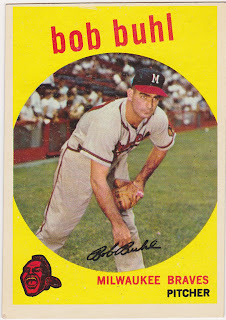 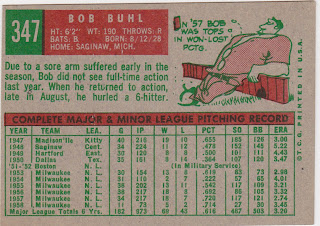 Bob Buhl was the perfect #3 starter for the tough Braves teams of the later 1950s. He pitched well while eating innings and matched the competitive nature of Warren Spahn and Lew Burdette. He spent a year in the White Sox chain after signing in 1947. The next year Buhl was granted free agency (free agency in 1948, who knew?) and signed with the Boston Braves. He pitched erratically for three minor league seasons then spent two years in the service.

He debuted as a rookie in 1953 and proceeded to win 13 games with 18 complete games and three shutouts. An suffered the 'sophomore jinx' in '54 but regained his form and won nearly a hundred games for the Braves during the rest of the decade  He made two starts for the Braves in the 1957 World Series and, although he was chanced early in both, he picked up a ring as a crown jewel on a nice career. An injury kept him out of the '58 Series.

Traded to the Cubs early in the 1962 season Buhl won double digit games and had respectable ERA's for Chicago teams that regularly finished at or near the bottom of the NL. He was later dealt to the Phillies in the trade that sent Fergie Jenkins to the Cubs. He pitched about a year in Philly before retiring in 1967 after he was released.

Buhl was known as one of the worst hitting pitchers of all time and went 0 fer 70 in 1962 which set a record for at bats without a hit. He tried hitting left-handed at one point but didn't have any better results.

Bob Buhl died in 2001 within two days of the death of his Braves roommate and friend, Ed Mathews. That's the sett Braves uni Buhl is wearing in front of the Seals Stadium grandstand. Add in the yellow frame and it adds up to a nice card.
Posted by Commishbob at 7:00 AM