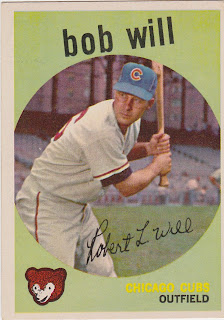 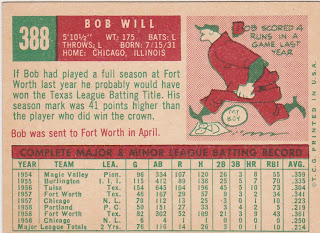 Outfielder Bob Will was signed by the Cubs out of Northwestern University in 1954. The local kid (he was from suburban Berwyn) charged through the Cubs' system with some seriously impressive batting averages. He debuted in 1957 and hit only .223 in 70 games. In 1958 and '59 he was back in the minors and had another two good years.

1960 was his one season as a regular at the major league level and he hit .255 with 54 RBI for the Cubs. He ranked high in several defensive categories as well including leading the league in fielding as a rightfielder and finishing second among all outfielders.

His career never again had the luster of 1960. He was a part time player and pinch hitter for a few seasons and by '63 he was again a minor leaguer and then he retired to work in the banking business. Again I refer you to Tom Owen's Baseball by the Letters blog for a nice story of Bob Will and a look at his 1960 Rookie Stars card. Yup, he was one of those guys who appeared on a regular card before being a 'rookie star'.

I really like those 1960 Rookie Cards. And Will looks a bit like Bill Virdon on that one, doesn't he?

I really love Polo Grounds pictures on these cards. Those apartment towers seen through the stands.... I dunno, it's just a cool view. And the Cubs' uni of that era is pretty sweet as well. Love that cap with the piping.  What a great baseball card!
Posted by Commishbob at 6:30 AM