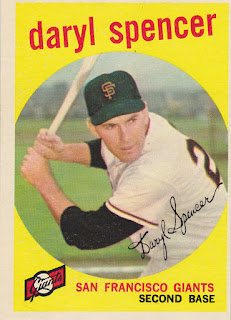 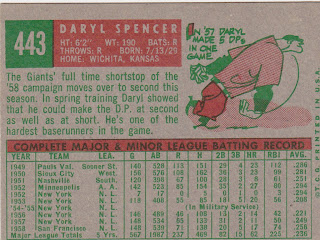 After coming out of Wichita State hard hitting infielder Daryl Spencer spent a year in independent ball before being acquired by the New York Giants in 1950. After a 'cup of coffee' in 1952 he broke into the Giants everyday lineup in 1953 and slugged 20 homers with 56 RBI. His .208 average was a career low although his career average was only .244 in 10 seasons.

After that rookie year Spencer spent two seasons in the military and led his army team to an armed services baseball title. Back in the bigs in 1956 he spent the next four seasons as a Giants' starting middle infielder. He was a solid if unspectacular player and was dealt to the Cardinals for 1960 and he played there for a season and a quarter as their shortstop. Then it was on to the Dodgers and Reds in a platoon role.

After he retired from the majors he spent another seven seasons in Japan where he played on four pennant winner with the Hankyu Braves. He slugged 74 homers over his first two seasons there. His aggressive style, especially on the base paths was a revelation to the Japanese and he was a very popular player there. He retired at one point, returned to Wichita to open a restaurant but was drawn back to Japan and served as a player coach before retiring for good after the 1972 season.

After returning to the States for good he managed in amateur ball and worked for Wichita's AA club.

This is a nice clean card with an action pose. I like it a lot for that reason. I'd guess it was taken at Seals Stadium because there were many in the set that were shot there. Plus, Spencer has on the Giants' home uni.

Informative interview done while Spencer was still in Japan can be found here. And as usual his SABR page is the go-to spot for his backstory.

Found this card image on the web. Spencer on a Japanese card. 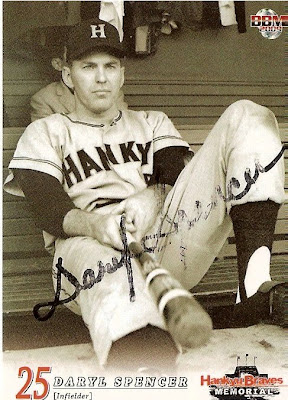 Posted by Commishbob at 7:12 AM