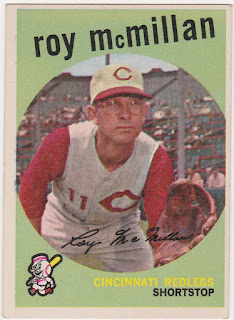 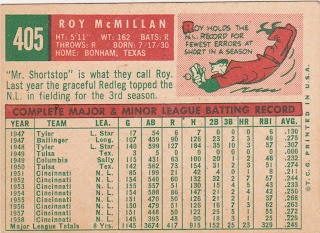 Slick fielding shortstop Roy McMillan who, as the card-back notes, was known as 'Mr. Shortstop',  signed with the Reds out of Texas A&M in 1947. He had one good hitting season in the Reds' system but mostly used his glovework to move up to the Reds in 1951. He held down their shortstop spot for 10 seasons while winning three Gold Gloves and making a couple of NL All Star teams.

He was so respected for his defense that he finished sixth in MVP voting in 1956 despite a .263 batting average. He led the NL in assists at SS four times, putouts three times, DPs three times and fielding percentage three times. Veteran player and manager Jimmy Dykes called McMillan the best shortstop he'd ever seen. McMillan earned himself a Sports Illustrated cover appearance and called it the greatest honor of his career. He's a member of the Reds' Hall of Fame.

He was traded to the Braves for the 1961 season so he missed both the Red's title (gone too soon) and the Braves pair of titles (there too late). After three plus seasons in Milwaukee he was dealt to the Mets where he finished out his career. After retiring as a player he coached and managed and had brief stints as manger of the Mets and Brewers.

Roy McMillan died in 1997. His '59 card is a Seals Stadium shot with the seafoam green frame. Good stuff.

Here is his Sports Illustrated cover: 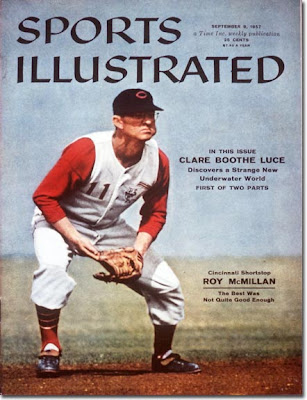