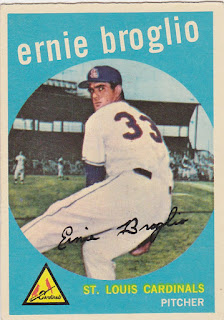 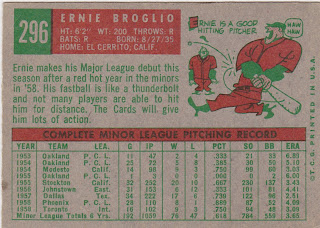 Poor Ernie Broglio. Won 77 big league games, had some really good years with the Cardinals, finished third in the 1960 Cy Young voting... and all he's remembered for is being "the bum who the Cubs got in the Lou Brock trade."

Broglio began pitching with the Oakland Oaks in the old PCL in 1953 and was acquired by the Reds for 1954. He was back in independent ball in '55 and then was purchased by the Giants and traded to the Cardinals before he finally made his debut in 1959. He won 7 games, lost 12 and only his three shutouts that season gave a clue as to what would occur in 1960.

In June of 1964 he was the main part of a trade that sent him to the Cubs and brought a young but struggling Lou Brock to the Cardinals. Brock, of course, went on to the Hall of Fame and glory in St. Louis while Broglio went 7-19 on the North Side before he was out of the big leagues after 1966. Many years later Broglio revealed that he had been experiencing arm problems and believes the Cardinals knew that before the trade. He discusses that and many other aspects on his career in a great ESPN web story.

Cub fans never have gotten over that trade and Broglio was still boo'd at Old Timers' events there. Ironically he and Brock became friends and have remained so over the years.

Odds and ends: This is Broglio's rookie card. It's got that 're-touched minor league picture' kind of vibe. Pretty sweet nevertheless. At least it's not a Yankee Stadium or Seals Stadium shot.... Broglio's name is pronounced BRO-lee-oh, silent 'G'. At least his is one name I pronounced correctly back in the day.... he was such a phenom in his early career that he made a Sports Illustrated cover in 1961. The cover was shot in Candlestick Park (I know those trees) likely at this game on the first of June. He had 27 wins in under a season and a half when the magazine was published. 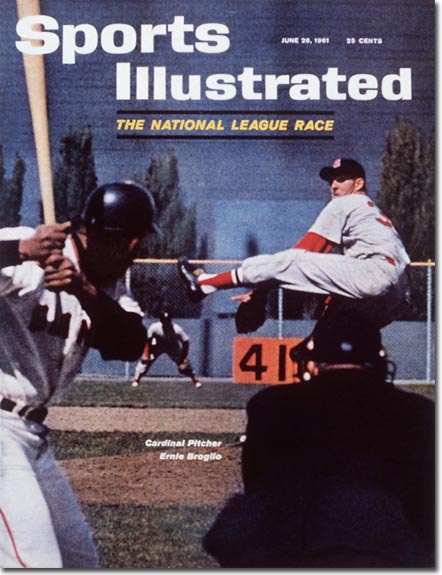