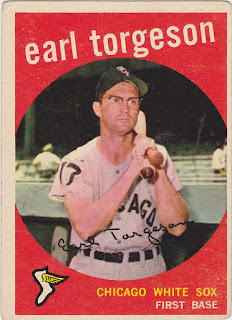 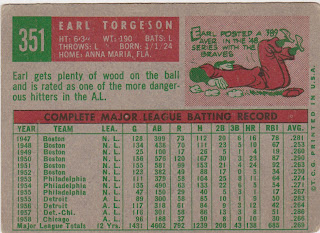 Here's your challenge, should you decide to accept it: find a picture of Earl Torgeson smiling. Or even wearing anything close to a smile. Not possible, I've tried.

He was known as the Earl Of Snohomish. Which sounds like something akin to the Prince of Darkness but is just a reference to his hometown of Snohomish, Washington.

Torgeson began his career out on the West Coast in 1941 playing for teams in the PCL and Western International League. He spent three years in the service during WWII and returned to baseball in 1946. He was traded by the Seattle Rainers to the Boston Braves and made his MLB debut with that club in 1947. He held down the first base job for Boston until 1952 putting together some pretty nice power numbers along the way. He led the league in runs scored in 1950 and hit .368 for the Braves in the 1948 World Series.

Traded to the Phillies after the '52 season he played in Philly for a couple of years, was traded to the Tigers, on to the White Sox and finally the Yanks in 1961. He got into another World Series when the White Sox played (and lost to) the Dodgers in 1959.

Torgeson's sidebar story is much more interesting than his career movement, though. Despite resembling your local pharmacist, or the bookworm you had in school who had no friends, he was a tough guy known for his numerous scrapes. Several of the fights he took part in are chronicled in this fun-to-read column. Some great pictures down that page, as well. And SABR is always a good spot to dig further into a character like Torgeson.

When I've flipped through my '59 binder looking for cards to upgrade somehow this one hasn't caught my eye. It's not terrible but it is probably in the bottom 10% of my set condition-wise. And, btw, I think I recognize the Yankee Stadium usher in the seats behind Angry Earl. I'm sure he's looking for a fan to pressure for a tip by dusting off the seat..
Posted by Commishbob at 6:30 AM