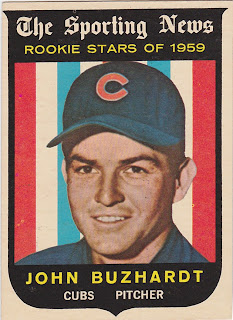 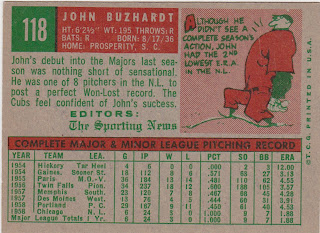 From what I can tell John Buzhardt's last name is pronounced "buz-ART', not "BUZZ-heart". So, 50 years later, I stand corrected. Whatever.

Anyway as you can see Buzhardt was a Cub prospect in 1959 and with good reason. And climbing through the team's farm system since he was signed in 1954, he had had a nice start to his career in '58. He had gone 3-0 with a 1.85 ERA in six September games including two impressive wins over the Dodgers to finish the month.

He returned to earth in '59 while taking his lumps as a starter and reliever and was dealt off to the Phils for 1960. Two rocky season in Philly led to a trade to the White Sox. Back in Chicago Buzhardt saw the best results of his career in 1964 and '65 when he went a combined 23-16 with very nice overall numbers.

Another decline in 1966 put him on the 'expendable' list and he played for three clubs in 1967, the Sox, Orioles and Astros.  He pitched in seven games for the Birds, poorly for sure, but I have no recollection of him with my club. And I was living in Houston during his time here (which stretched into 1968) even though I followed the 'Stros fairly closely.

In 1961 the Phillies suffered an NL record 23 game losing streak. Buzhardt had the honor(?) of winning the games at both ends of that streak. As a footnote to that footnote, he lost three games during the streak. This page recalls the game that ended the streak.

Posted by Commishbob at 6:05 PM