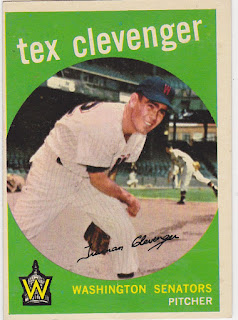 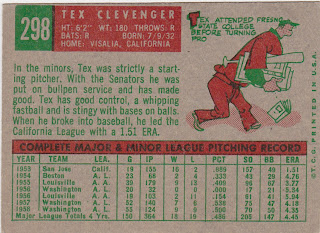 Don't know how, when or why Truman Clevenger got the nickname 'Tex' but he kind of looks like a cowboy, I guess. I can't find anything on the 'net to clear it up either (update below).

Tex was a Boston Red Sox signee out of Cal State-Fresno in 1953 and debuted with the Sox in 1954. He went 2-4 in eight starts (23 games total) and spent the next two seasons as a starter in their chain. Traded to the Senators for 1956 he established himself in their bullpen in 1957. He made 50+ appearances for the Nats in each of the next four seasons, leading the league in games in '58.

He was taken by the Angels in the expansion draft and pitched briefly for them in 1961 before being traded to the Yankees that May. He had the great fortune therefore, to go from a fledgling franchise to one of the powerhouse teams of all time. He pitched in exactly 21 games for the Yanks in both '61 and '62. Both of those teams won the World Series although Clevenger didn't appear in either. But he has two rings!.

After more time in the minors Clevenger retired to work in the insurance business and as a farmer and eventually to buy a Ford dealership in Pottersville, CA. He sold the business and retired for good in 2010.

Clevenger poses in front of the visitors' dugout in what looks to be Griffith Stadium with someone warming up just down the line behind him. Makes for a neat card.

Sunday Update... I just found a chapter in this book on Google in which Clevenger himself says he was nicknamed by Red Sox teammate Johnny Pesky who felt Clevenger resembled an old teammate, Tex Hughson. Clevenger goes on to say that players from Texas would ask him what part of the Lone Star State he was from and he drew weird looks when he told them he'd never even been to Texas.
Posted by Commishbob at 10:48 AM