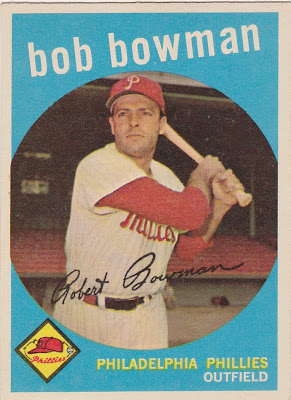 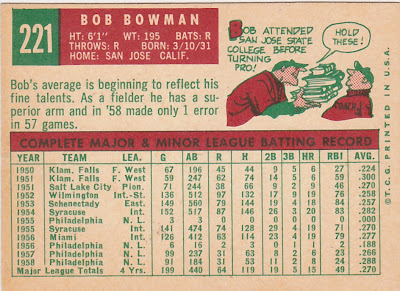 After signing with the Phils in 1950 Bob Bowman used a strong arm and pretty good power to propel his way to the majors in 1955. A brief look that season was followed by another minor league trial and taste of the bigs in 1956.

He made the Phillies as a semi-regular outfielder the next season and hit .266 while finishing second in the NL in outfield assists in 1958. He struggled at the plate again in '59 and the Phils experimented with him as a relief pitcher late that year, getting him into five games. He lost his only decision in a 13 inning game on an unearned run. He'd entered the game as a pinch-hitter in the 12th, drawing a walk.

That game was his last big league appearance of any kind. He finished up his career with a couple of minor league seasons including a handful of games on the mound. The Northern California native worked for a beer distributor after his baseball days.

That's a Connie Mack Stadium shot on this card. Topps' photographers made it that far into the boonies I guess.
Posted by Commishbob at 7:00 AM