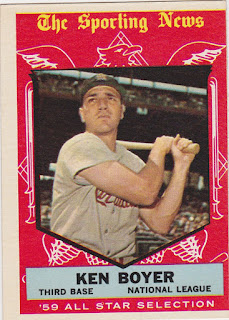 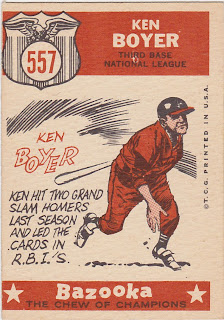 A second look at Ken Boyer in the Topps '59 set. His regular card, a pink framed beauty, featured a Polo Grounds shot. So does this one. And maybe it's the angle but I think he looks so much like his brother Clete in this shot. More so that usual.

Ken Boyer was a seven time All Star. He played in 10 games total and hit .348 with two dingers. He went 0-fer-2 as the starting third baseman in the second of the two 1959 All Star games. As a pinch hitter in the first one he singled off Whitey Ford in the bottom of the eighth and scored the tying run on Hank Aaron's hit. The NL won 5-4.
Posted by Commishbob at 8:30 PM

Email ThisBlogThis!Share to TwitterShare to FacebookShare to Pinterest
Labels: All Star, Ken Boyer