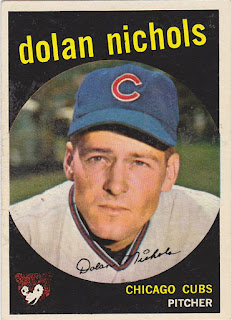 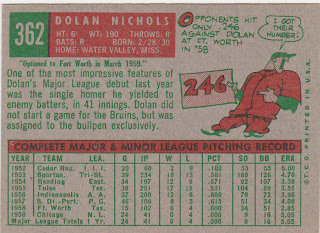 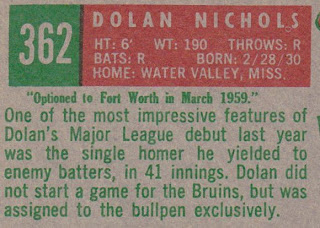 If you are Dolan Nichols and you were out of the majors by the time this card was issued, and you have to suffer the indignity of having your demotion to the minors plastered on the back for the world to see, then you may as well be immortalized on a cool, black-bordered '59. Right? Look at Dolan, he's all bidness. I just love this card, btw.

As noted this is both his rookie and final card. The right-hander had pitched for the Cubs in 1958 and went 0-4 in 24 relief appearances. The card-back notes that he allowed only one homer in 41 innings. Any port in a storm I suppose.

Nichols had been in the Indians' organisation since his signing in 1952. He pitched pretty well overall as he worked his way up the Indians' chain as a starter but was dealt to the Cubs late in the 1957 season. He made the Cubs' roster out of camp in '58 but from the looks of his '58 game logs he was demoted in July and brought back for one last game in September.

Nichols was out of Tishomingo, Mississippi. His nickname was 'Nick'. Hell, EVERYONE who's last name is Nichols goes by 'Nick' (or Nic). He sold furniture after his days as a ballplayer

That's all there is to say about Dolan Nichols, except his middle name is 'Levon'. So in his honor here is Elton John's Levon. One of the most iconic pop songs of all time and one I never tire of, even after 40+ years.. It's from the classic, timeless Madman Across The Water album.