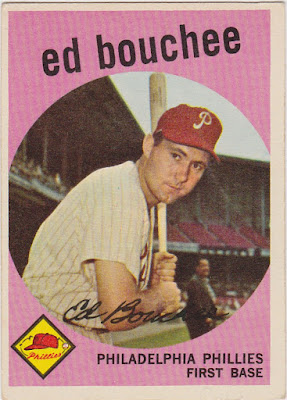 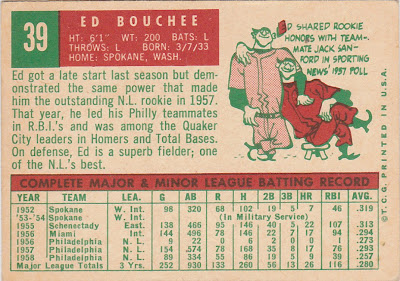 After an impressive 1952 debut in the minors Ed Bouchee spent a couple of years serving in the military during the Korea conflict. He returned in 1955 and as a Phillies farm hand he continued his fine hitting. He got his chance in the majors as the regular first baseman for the Phils in 1957 and didn't disappoint. In fact he was second in Rookie of the Year balloting and picked up some significant MVP votes. He had lots of promise.

But that all changed following that '57 season when he was arrested on a morals charge in his native Seattle. No need to re-tell the story here but it's easy enough to find it. The incident cost Bouchee the first half of the '58 season and Topps dropped his card from the 1958 set. Returning in July Bouchee just couldn't match the spark of his rookie year and in fact he never did.

He was dealt to the Cubs for the 1960 season and was taken by the Mets in the '61 expansion draft. The woeful '62 Mets proved to be Bouchee's final stop in the big leagues although he spent 1963 with their AA club. He finished with a .262 lifetime average and 61 homers.

This pink framed card marked Bouchee's return to the Topps card world. And note how Topps handles his 1958 season. They state he 'got a late start.' That's Connie Mack Stadium that he's posing in. I guess it wasn't too much of a hike for the Topps photographers to get down to Philly. I never did get there despite not living all that far away for many years as a kid.

BTW.... indispensable blogger Bob Lemke has produced a nice '58 Topps 'card that never was' for Bouchee.