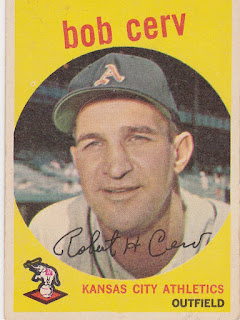 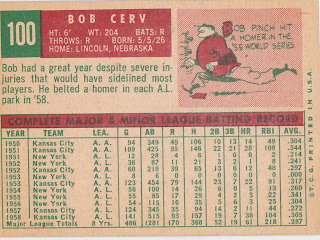 God willing on the morning this entry is posted my family will be in Lincoln, Nebraska watching my son graduate from the University of Nebraska. This will be the third time I've had the pleasure of watching one of my children walk and I feel like I've done what I vowed to do when we started a family, get my kids a good education and out into the world.

Nebraska native and UNL alum Bob Cerv was signed in 1950 by the Yankees after a standout career in baseball and basketball for the Cornhuskers. He debuted in 1951 and split that season as well as the next two shuttling back and forth between New York and the Yanks top farm club in Kansas City. From 1954 through 1956 Cerv put up solid numbers in a limited role as he was unable to crack the solid Bombers starting lineup. He did get to play in both the '55 and '56 World Series and homered as a pinch hitter in Game Five of the '55 Classic. He was traded to Kansas City (now a big league franchise, the A's) after the '56 season and for the first time in the bigs he held down a starting job.

Cerv’s most productive year in the majors was in 1958. He belted 38 homers, a mark that still stands as the record by a professional player in Kansas City. He was the first Husker to participate in an All-Star Game. He started the 1958 All-Star Game in left field for the American League. His accomplishments that year are made more memorable by the fact that he played for six weeks with his jaw wired shut and on a liquid diet following a collision at home plate in a May game against the Tigers. The Athletics traded Cerv back to the Yanks early in 1960 and he went 5 for 14 in the Series against the Pirates that year.

He was drafted by the Angels in the 1960 expansion draft but after a month in LA he was traded back to the Yankees (again!!) in May of 1961. Again a role player he generally spelled his two roommates, Mickey Mantle and Roger Maris. He didn't appear in the 1961 Series.

Cerv finished out his career with a one month whirl in Houston after the Yanks sold him to the Colt 45s in June of 1962. After his big league career he coached college baseball at Southeast Missouri State College and John F. Kennedy College in Wahoo, Nebraska where he also coached the men's basketball team.

Cerv occupies the well worn spot in front of the visitors dugout at Yankee Stadium to pose for this shot. He looks like a guy who is happily remembering his World Series days in this park and in knowing he's going to play here again one day..
Posted by Commishbob at 8:00 AM